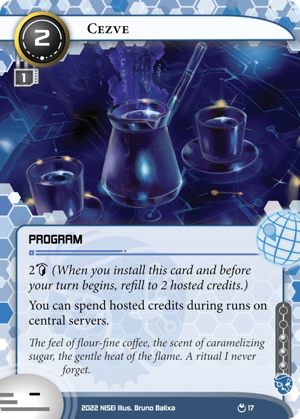 2recurring credit (When you install this card and before your turn begins, refill to 2 hosted credits.)

You can spend hosted credits during runs on central servers.

The feel of flour-fine coffee, the scent of caramelizing sugar, the gentle heat of the flame. A ritual I never forget.
Illustrated by Bruno Balixa
Decklists with this card

The downside, of course, is that it's a program, and so it takes up precious . And of course, this is Criminal, who don't have access to all of Shaper's fun program-searching tech.

But it's also a 2 program that gives you 2 for runs against central servers. As far as income-generating programs, that's pretty good. It can pay for itself on the turn you put it out, which is great for keeping up your tempo. (Compare with Rezeki, which doesn't pay for itself until two whole turns after install, and is STILL an amazing card!)

Now, that's not a completely fair comparison, since Rezeki gives you credits unconditionally, instead of recurring credits that can only be used mid-run, but given that this was released in a set that is all about criminals making runs on central servers (via the new "Mark" mechanic) it seems like it should be pretty easy to build decks that utilize these credits on every (or nearly every) turn.

Also, as far as restrictions go, these are pretty light! You can only spend them during central runs, but while on a central run, you can use them for basically anything, up to and including paying for breakers, paying for trash costs, pumping up your Hyperbaric, and installing things mid-run via Self-modifying Code, Prognostic Q-Loop, etc.

And did I mention that it's not unique? So you can include multiples in your deck and not feel bad if you draw them. And with even two of these on the board, the amount of pressure you can bring to bear on the centrals is huge. 4 is basically a free Sure Gamble every turn that you don't have to click for.

I think this will be a solid econ option for criminals. Maybe not every criminal deck, but for anyone that wants to keep up constant pressure on the centrals, this seems like a godsend.