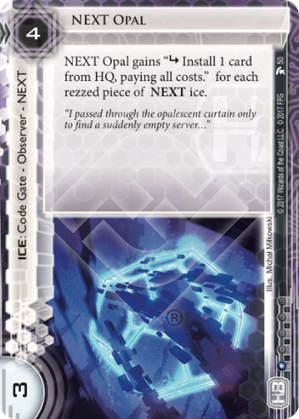 I don't think this card is as bad as people here have been saying. Yes it makes subroutines that if they fire force the Corp to install 1 card from HQ. Okay I can see how you may not want to do that, but the only way a Corp may not have the ability to install something and pay for it's install cost is if it is installing ICE farther out on a server. Because unless something has changed, installing a card in a server or in the root of a server or installing any ICE in the first position doesn't cost credits to do. REZZING a card costs credits but this card doesn't say install and rez paying all costs. It just says Install 1 card paying all costs.

Another thing to keep in mind is that the Corp player gets to choose which cards to install and where. If you have a hand full of ICE....this could let you throw up new ICE without wasting clicks. It also would help with asset spam.

A third thing to keep in mind, should this fire and you have agendas in hand. You can put them in a server with ICE protecting it. Or if you really want to protect things you could install an agenda. Then install over it. Then install over that. Nothing on the card says you can't.

Personally I think this piece of ICE is useful in a NEXT Level Design deck or any deck that runs a lot of ICE. If nothing else as the flavor text on the card suggests. Stick this in front of HQ only and if they run you can make sure they don't get access to anything good by installing it first if they let it fire.

All in all I think this card definitely has a place.

Pravikun 1
The thing is, you could be forced to make less-than-optimal plays. E.g. you have ICE in hand that you want to put on a server later but installing it now would cost so much that you cannot afford to finish advancing an agenda next turn. And placing it on a new empty server effectively means trashing the ice. — Silv 10 Jun 2017
WHY DOESN'T THIS CARD JUST SAY &quot;GAIN 1 CREDIT&quot;!? WAS IT THAT HARD, FFG!?!?!? — LynxMegaCorp 10 Jun 2017
@Pravikun - It has a niche spot in asset spam, but otherwise it's pretty terrible. Basically, it means the Runner gets to decide when the Corp installs stuff, which is never a good thing. Assuming it’s not being played in asset spam, you wouldn’t want to have to install a single piece of ICE in a new server because it’s too easy for the runner to break into, and reduces the amount of ICE available to install over servers you actually care about. You could try using one of them so you’re not forced to install your entire hand, but what’s the point of NEXT ICE you don’t want to play with other NEXT ICE? — freshmint22 12 Jun 2017
I believe this card was designed sub-optimally purposefully to reduce the power of NEXT ice. After all, the more they publish, the stronger the suite gets. — Apex Predator V 6 Jun 2018