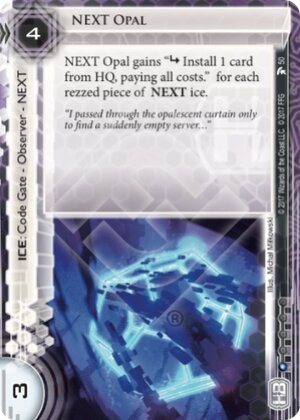 NEXT Opal gains "subroutine You may install 1 card from HQ, paying all costs." for each rezzed piece of NEXT ice.

"I passed through the opalescent curtain only to find a suddenly empty server..."
Illustrated by Michał Miłkowski
Decklists with this card

All FFG had to do was print 'NEXT Opal gains "-> The Corp gains 1$" for each rezzed piece of NEXT ice.' but instead they gave us this shit; it'll only encourage asset spam, which I think we all agree sucks. Why the f*ck did they think this was okay? Talk about turning my favorite suite of ice into a joke. Thanks, FFG. Thank you for understanding.

It's cool that they are printing more NEXT ice, especially because NEXT Bronze and NEXT Silver are rotating soon. However, this ice does not seem very good as printed. Without a "May" in front of install, this ice would require you to dump your entire hand if there are a few NEXT ices installed. Maybe Cerebral Imaging: Infinite Frontiers will like this? I can't think of any other ID that would use it as is.

(Earth's Scion era)
timurleng 159
Oh god, I thought it was garbage because it's in Yog range, but now it's plainly obvious that this ice is actively bad, ouch! — Quarg 26 May 2017
Hang on, how is this enforceable? What do you do if the Corp says "I can't pay the costs for anything currently in HQ"? Trust them? Reveal HQ to the Runner? — LordRandomness 26 May 2017
Yeah, I agree, it is difficult. Compare the wording to Crick: " — timurleng 26 May 2017
Oops, last comment got cut off. Compare the wording to Crick: "Install a card from Archives (paying its install cost)" If there is an installable card in archives, you don't have a choice about firing this. I believe that NEXT Opal works the same way, but as you say there's no way to confirm if the Corp is able to install anything or not. Making this conditional would solve a lot of problems. Really surprised this was not addressed in the UFAQ. — timurleng 26 May 2017
Netrunner implicitly assumes a fair amount of trust from the Corp player. Like, they won't install an Agenda and pretend it's a piece of unrezzed ice. — diracdelta 28 May 2017
That will eventually be discovered though, either when the Corp tries to do anything with the installed card or post-game. It's difficult to trace back and determine whether there was an installable card when NEXT Opal fired if the game has gone on long enough afterward. — LordRandomness 28 May 2017
NEXT Silver is Lunar, Lunar is not rotating. — Reyos 17 Sep 2017
They've now errata'd it to have "You may". — Toper 17 Oct 2017
2

With errata, this card is now playable. For the cost of 4, you get a for installing things for each NEXT ice in play. So let's say it's the dream and you have 2 other NEXT ice in play when the runner facechecks this. You gained ! #ValueTown

Also, you're only installing stuff from hand. I think you need to build your deck around it so you have a high number of installables (AAL instead of IPO, for example). And if this is on R&D and I'm the runner about to make lots of Equivocation runs, I'll just let it fire every time. You'll get some free installs but you'll run out of cards in hand.

I think the comparison here is Architect, which gives you the same numbers but for a sentry (usually more expensive to break), lets you draw a card from your deck and install it, gives you info about whats on top of your deck, and gives you the option of installing something from archives. Plus it can't be trashed.

This needed some tweaks, either waving install costs, letting you install from archives (Crick costs 1), or being half the cost to rez. :-/

The sad thing is the NEXT suite of ice will be dragged down in power level until like 2021 when this thing rotates out.

This is quite possibly the most poorly designed card in the game so far, all because the words “The Corp may” are missing from the subroutine. Because it’s not optional, the corp will be forced to install at least 1 card from HQ each time it fires. The card seems to favour an asset spam style, and the last thing FFG should be encouraging is more asset spam.

It’s a piece of NEXT ice that you never want to play alongside other NEXT ice because it’s too risky (unless asset spam), completely negating the point of NEXT ice. It also appears to have no synergy with NEXT Design: Guarding the Net, which generally favours massing lots of ice over as few servers as possible. So, either the corp has to install cards in useless remote servers, trash stuff already installed to make space, or pay a big install cost if it’s a piece of ice.

But worst of all, the corp can lie by saying they don’t have anything in hand they can install, and the only way the runner can try to keep them honest is through access or expose effects. If it does see play in its current form, eventually someone at a tournament will be caught cheating, or be falsely accused of cheating, and NEXT Opal will have enabled that. It's unacceptable and unhealthy for the game and perversely its only saving grace is that it might be to poor to see play.

(Earth's Scion era)
freshmint22 2
I'm pretty sure it's supposed to say "The Corp may", because there is no way to really enforce the install and nothing else in the wording of a card implies that this is a mandatory action. So imo, it's pretty safe to assume that it actually gives an option to install instead of forcing to install. — Shieldwall 28 May 2017
The firing of subroutines is mandatory. The effect of the subroutine can be optional but only if it's worded as such i.e. conains "may". I certainly think it should be optional; I don't think it's supposed to be. — freshmint22 29 May 2017
Good point well made. Can anyone say "upcoming errata?" — Greasythumb 29 May 2017
This will be errata number 16 or so. 16 in just the last few datapacks. — quailman2101 30 May 2017
I can't say for sure in Netrunner, I've never had to deal with it in this game before, but most games, hidden info allows a "fail to find" but public info does not, and the corp hand is hidden info. — Reyos 17 Sep 2017
0

I don't think this card is as bad as people here have been saying. Yes it makes subroutines that if they fire force the Corp to install 1 card from HQ. Okay I can see how you may not want to do that, but the only way a Corp may not have the ability to install something and pay for it's install cost is if it is installing ICE farther out on a server. Because unless something has changed, installing a card in a server or in the root of a server or installing any ICE in the first position doesn't cost credits to do. REZZING a card costs credits but this card doesn't say install and rez paying all costs. It just says Install 1 card paying all costs.

Another thing to keep in mind is that the Corp player gets to choose which cards to install and where. If you have a hand full of ICE....this could let you throw up new ICE without wasting clicks. It also would help with asset spam.

A third thing to keep in mind, should this fire and you have agendas in hand. You can put them in a server with ICE protecting it. Or if you really want to protect things you could install an agenda. Then install over it. Then install over that. Nothing on the card says you can't.

Personally I think this piece of ICE is useful in a NEXT Level Design deck or any deck that runs a lot of ICE. If nothing else as the flavor text on the card suggests. Stick this in front of HQ only and if they run you can make sure they don't get access to anything good by installing it first if they let it fire.

All in all I think this card definitely has a place.

(Earth's Scion era)
Pravikun 1
The thing is, you could be forced to make less-than-optimal plays. E.g. you have ICE in hand that you want to put on a server later but installing it now would cost so much that you cannot afford to finish advancing an agenda next turn. And placing it on a new empty server effectively means trashing the ice. — Silv 10 Jun 2017
WHY DOESN'T THIS CARD JUST SAY "GAIN 1 CREDIT"!? WAS IT THAT HARD, FFG!?!?!? — LynxMegaCorp 10 Jun 2017
@Pravikun - It has a niche spot in asset spam, but otherwise it's pretty terrible. Basically, it means the Runner gets to decide when the Corp installs stuff, which is never a good thing. Assuming it’s not being played in asset spam, you wouldn’t want to have to install a single piece of ICE in a new server because it’s too easy for the runner to break into, and reduces the amount of ICE available to install over servers you actually care about. You could try using one of them so you’re not forced to install your entire hand, but what’s the point of NEXT ICE you don’t want to play with other NEXT ICE? — freshmint22 12 Jun 2017
I believe this card was designed sub-optimally purposefully to reduce the power of NEXT ice. After all, the more they publish, the stronger the suite gets. — Apex Predator V 6 Jun 2018