When the Runner encounters Komainu, it gains "subroutine Do 1 net damage." for each card in the Runner's grip for the remainder of this run. 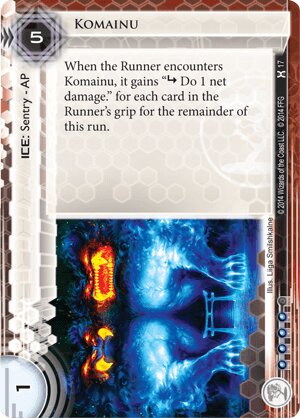 (Up and Over era)
Ber 2542
What makes this card amazing is that it forces the runner to play in a direction that is counter-productive. When you run against Jinteki you want to have a big hand. Komainu makes you pay for it. It looks like it gets useless if you run with an empty hand. But indeed, it is the most dangerous thing you can do against Jinteki. — Him 6 Mar 2015
Point of interest, both Komainu and Femme Fatale's abilities trigger on encounter. Komainu would still get subroutines equal to the runners grip and the runner would have wasted Femme's ability. — Vikingcrim 17 Apr 2015
Also Chum into Komainu is a good call. No more breaking all but one or two of the subroutines to save some credits. Though Chum won't fire if there are no subroutines to break. — Vikingcrim 17 Apr 2015
Ignore both of those, upon reading the FAQs for a different clarification I came across my mistake, sorry. — Vikingcrim 17 Apr 2015
Beginners Question: Is Komainus treat a subroutine, or not? Just lost a game as Con because we handeld it like a subroutine. But this would totally negate the card, right? — Bentman 18 Jun 2015
@Bentman, "When the runner encounters..." is not a subroutine. It's just card text, so it can't be broken. However, it can result in Komainu having subroutines, which can be broken. — AV8R 28 Oct 2015
I'll just add that GS Shrike M2 is a pretty solid counter to this guy. — Damien Stark 16 Jan 2016
Does Hunting grounds work against this? — Bestialterata 29 Jan 2016
It totally does, and makes the Corp very sad. — Slidewinder 10 Feb 2016
the pronunciation is closer to ko - my - nu — dr00 27 Feb 2017
You know, for the longest time I though this was a two-headed dog rather than two separate dogs... — LordRandomness 6 Mar 2017