As an additional cost to rez Archer, the Corp must forfeit an agenda.

Next time, read the Terms of Service more carefully. Or you might find yourself in the danger zone.
Weyland Consortium • Mike Nesbitt • System Core 2019 130
All sets:
Links: Decklists | ANCUR 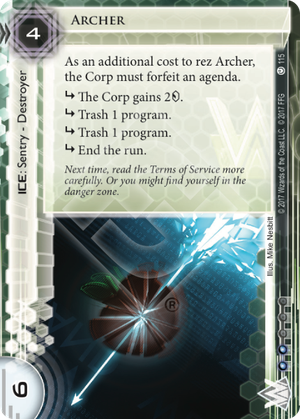 (Chrome City era)
lynkfox 356
Yeah, Archer's a great piece of ice. Very little feels better than an opening hand that involves Hostile Takeover and an Archer. The ability to threaten both early- and late-game rigs is devestating. Also, the flavor text? Pefection. — KitsuAeryn 8 Jun 2015
An Archer that resolves it's subroutines when you rez it is often game-winning. — Satellite Uplink 10 Jun 2015