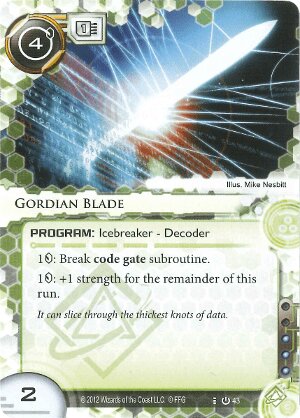 1credit: +1 strength for the remainder of this run.

It can slice through the thickest knots of data.
Illustrated by Mike Nesbitt
Decklists with this card

Featured in many tournament winning decks, Gordian Blade is one of the most powerful breakers in the game. It has the combination that everyone loves: 1, 1 to pump, 1 to break. It's reasonably efficient for early game (e.g. Enigma), high subroutine (e.g. Merlin), and high strength (e.g. Tollbooth) Code Gates.

The Blade is not as weak as ZU.13 Key Master, not as expensive as Torch, doesn't require stealth (unlike Refractor), can be pumped to infinity (unlike Yog.0), and is not limited to a single server (unlike Cyber-Cypher). Like all great hacking tools, it is flexible, efficient, and elegant. If you are only putting one Decoder in your deck, it is a solid choice.

It is also a subtle reference to a famous Greek Legend. For those of you who are unfamilar:

Long ago, an oracle decreed that the next man to enter the Phrygian capital (modern Turkey) should become king. Gordias, a peasant, drove into town on an ox-cart, and was declared the ruler. Out of gratitude, his son dedicated the ox-cart to Zeus, and tied it to a post in the palace with an intricate knot that had no exposed ends ("GORDIAN Knot"). The cart stood unmoved for generations. It was, in fact, still there when Alexander the Great arrived. Alexander attempted to untie the knot, but could not find the ends. Instead, he sliced it in half with a stroke of his sword-er, wait, I mean, BLADE. Once Alexander moved the cart, an oracle further prophesied that the one to untie the knot would become king of Asia (... and win a Fantasy Flight game mat).

The mid-costed version of the series of shaper decoders that cost 1, boost strength for 1 and break subroutines for 1 with no further restrictions. Gordian Blade strikes a pretty good middle ground between cost to install and cost per run.

While specialized decoders exist that are more efficient in specific setups, either of these will get you through any code gate you encounter for a reasonable amount of credits without any extra support.

Synergies:
If there are multiple code gates protecting a single server, you get extra value from Gordian Blade keeping its boosted strength for the rest of the run.

Some examples of in-faction cards that can help you ensure this are:

(The Valley era)
Firerunner 20
Don't forget Synergies of Nasir... You have 2 credits and are about to hit an unrezed Little Engine? Good, pump to 2, going down to zero and then use your new 5 credits to pump and break. — Goldstep 16 Apr 2015
Study Guide is generally better for Nasir to dump credits, since it maintains its strength permanently — algorithm 5 Nov 2015
Study Guide is really only good with recurring credits (looking at you, Multithreader), and even then you should probably run Zu for early breaking. — EnderA 24 Feb 2016