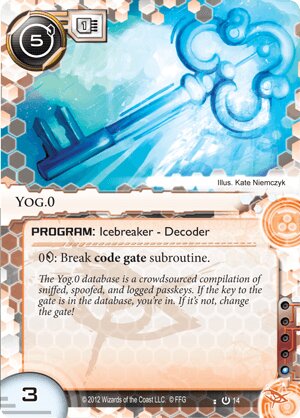 The Yog.0 database is a crowdsourced compilation of sniffed, spoofed, and logged passkeys. If the key to the gate is in the database, you're in. If it's not, change the gate!
Illustrated by Kate Niemczyk
Decklists with this card

Short for 'You Old Git', a perfectly acceptable response when someone looks at you, grins evily and makes a slow unlocking motion in your direction. Feel that? That's your clever puzzles and sharply-dressed headshot bots doing nothing, absolutely nothing.

The thing is, even with the most m4d pr0 breakers installed, the Runner will in most cases still have to pay something, even if it's just a sympathy credit or a power token. Sure, a Corroder shinkles through fuzzy walls for a measely 2, but damn it, that's 2! That's 2 they don't have any more, or 2 they had to flip over on a Cyberfeeder (I don't care! Let me enjoy this). If there's another wall behind it, that's like, 4! (100% more than 2!) You might think, 'I don't feel so bad now. Sure they stole my second Priority Requisition and I've got three agendas in hand, but they at least paid to get it.' And you'll hide a little sniffle behind that brave face of yours. You really don't appreciate this small consolation until you have a YOG go through your stacked Viktor 1.0s to yoink something out of your hand, for free. It's like a ghost just stole your lunch money. You're not even hurt, you just sort of sit there and go, '...oh.'

With a Parasite or Infohoover powered up as well it can make your life very miserable (or great, depending on what side you're on). It's absolutely worth the 5 cost and after a few games you'll instinctively know when it's coming, and after a while you won't even fear it, you'll just sigh at the inevitable and put down a sentry instead.

Now a of couple quick tips for playing against YOG.0:

To sum up, in the Core Set you play your code gates knowing this will come out eventually. At 1-influence it's an obvious choice to include, especially in Criminal who don't actually have a Decoder of their own. It's a great thing to have and great pain to play against, but sooner or later you learn to deal with it. Fact is you won't have a choice in the matter.

(Fear the Masses era)
Tirranek 567
omg InfoHoover...I lost it. Great review! — WayneMcPain 5 Jul 2016
You know, every time I see one of these, I think to myself, "There's no way he/she can keep this up. They can't all be quality reviews." You consistently prove me wrong. Thank you. — slobad31 6 Jul 2016
Wow, thank you so much! You've all been very kind with your comments. I appreciate it a lot and I'll try to keep them interesting as I learn more. — Tirranek 7 Jul 2016
Troubleshooter can also put a Code Gate temporarily out of Yog reach, incidentally. — LordRandomness 15 Nov 2016
9

A high initial cost, but zero spent after that. You cannot up the strength, which means you need to pair it with some means of strength-boosting like The Personal Touch or Dinosaurus to get past stronger stuff. Other options are with Datasucker, Ice Carver, or a combo with Parasite.

I love to pair this with Rielle "Kit" Peddler: Transhuman and Dinosaurus. Get past all but the staunchest code gates and force the Corp to go deep quickly to negate her ability. With a Paintbrush, this card is a monster.

Simply put, Yog.0 is the Anarch card with the most impact of the Core Set. It was so strong that for a while (including at least a few store championship level tournaments) players were including only a bare minimum of code gates. There was even one deck that only had a single code gate at 3 copies, simply to force the runner to install Yog and then have it be useless memory for the rest of the game.

It’s ability to break for free, any number of subroutines, even though it is on a fixed strength, makes it one of the most dangerous Decoders in the game. For a long period, any Code Gate of 3 or less strength was simply dismissed as being too weak, because of the prevalence of Yog.0.

Even today, Yog.0 is still something that must be contended with, though as Code Gates grew in strength, its dominance of Decoders became less apparent. The arrival of the Yogasaurus (Yog.0 on a Dinosaurus) and in combination with Rielle "Kit" Peddler: Transhuman and a possible Paintbrush means Yog was still a threat - if not seen nearly as often in that manner. Yet no other Decoder, and no other Anarch card left players scrambling to deal with it in their corp deck designs, affecting the game as much as Yog has, and will, over the years.