Look at the top 5 cards of R&D and arrange them in any order.

There was a new texture in her phantom cortex. It had always been there, she realized. It was everything and nothing.
Jinteki • Alexandra Douglass • Core Set 73
All sets:
Links: Decklists | ANCUR 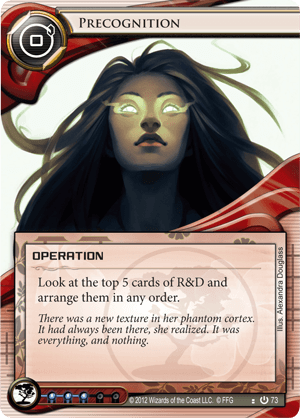 Precog has a very useful ability. It is the corp version of Indexing and given how powerful Indexing can be for a runner in the right situation, Precog seems that it should be equally powerful for the corp. Indeed, in terms of raw power, it is. The ability to stack what you want to see for the next few draws, or even the next two cards with a Jackson Howard draw for instance, could be very useful.

So why doesn’t Precog see play? It is zero credits to use, it has no cost except the click to play it and the card slot in your deck. It should see more play, for the ability to protect RD from any runs being fruitful for a few turns could be very powerful. Pull a Precog with the mandatory draw, purge virus counters against that pesky medium, and next turn set up RD.

The reason that Precog has not seen much play is most likely two fold. First, deck slots. Corp decks are always very tight, having to fit in anywhere from 15-17 pieces of ICE (on average, sometimes more, sometimes less depending on the archetype) 9-11 agendas (at least), and then economy cards to be able to support that ICE and scoring windows. That does not leave a lot of free room for cards that are not supporting scoring agendas directly. That leads into the second reason. For the Runner, where information they need is mostly hidden from them, Indexing is a great ability to dig deep and set up for a second run. For the corp, they already know what is in the deck - not the order of course, but they can do some light math with what they have on the table for an idea. Precog doesn’t help with scoring agendas directly. If it drew a card after arranging, then it would probably be extremely popular, but as it stands it takes a second click to get that card off the top of the deck.

Then comes the question of how to arrange them? Drop the agendas? Put them on top and draw them, risking them in HQ? Add in the fact that now there is Daily Business Show (for only a single influence too) that gives a similar, if smaller, Precog effect for every single turn of the game it is in play.

It could work well in combination with cards such as Mutate or Accelerated Diagnostics, and there certainly could be a deck in the use of such cards. Precog can certainly be useful, but it is a hard card to include when compared to other cards that advance the win strategy directly.

(Breaker Bay era)
lynkfox 356
Such a shame this card doesn't see play. I love it, but it never makes it into my decks either. Hopefully we'll see a stronger version one day, maybe a current or an upgrade. — Ber 6 May 2015
Would be awesomely thematic if this also had some sort of Psi-effect (like if you won the Psi game, it didn't cost a click or something) — badbones777 9 May 2015
I think it could be very nasty with Mutating — Beyo 5 Nov 2015
Sadly, it's best interactions are with Accelerated Beta Test and Accelerated Diagnostics, both in HB, and the steep influence cost of this card keeps the 3 from getting together in any meaningful way. — bubbathegoat 7 Nov 2015
I had the idea that you could combine this with Heritage Committee and Accelerated Diagnostics to play 3 Operations! But then I realised this combo basically involves playing 3 operations - in order to play 3 operations. At best it would save you clicks and agenda forfeits with the right operations, but that kind of deck idea simply will not fly. — Zakalwe 1 Apr 2016