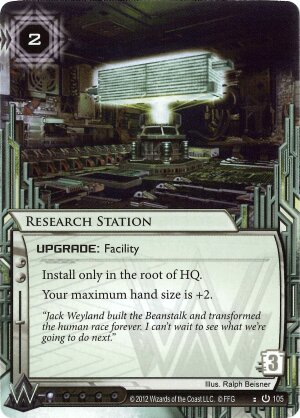 Install only in the root of HQ.

Your maximum hand size is +2.

"Jack Weyland built the Beanstalk and transformed the human race forever. I can't wait to see what we're going to do next."
Illustrated by Ralph Beisner
Decklists with this card

Hand size increase for corp is not nearly as important as for the runner. For the runner it can be a life or death situation, and with the ability to reduce their own handsize by using brain damage cost cards, it can be necessary to include cards that increase it. The main benefit for the corp is protecting agenda’s in HQ a little better. However, there is also a problem - to get that better protection, more cards need to be drawn, shortening the game.

In a combo heavy deck it can be nice to increase the options in hand for the corp, keeping more cards in hand, so more options while holding onto the pieces for the end game. Both of these advantages can be solved by more effective methods however. Scoring agendas, or purposefully overdrawing with Jackson Howard to trash them can protect agendas, with the added benefit Jackson already provides for most decks. Tutor cards can find the pieces of a combo a lot better, and can be used to find it ‘earlier’ than it necessarily would have been. On the fly tutors are even available, in Project Atlas or from archives in Project Vitruvius.

Research Station provides an effect which the corp doesn’t really need. Only two other cards, both Identities, increase hand size for the corp, showing how little of an effect it has in the game design space. Maybe with Cybernetics Division: Humanity Upgraded having the opposite effect, it could find a use, but it would probably be better to simply play with that restriction and learn to work around it, than wasting deck slots on an effect that isn’t really needed.

(Chrome City era)
lynkfox 373
I used to include 2x of this in my Blue Sun scorch deck back when it was built to rely on SEA Source for the final tag. When you have to dedicate 3+ slots to your combo, you really notice the extra space in your hand. It's nice to be able to hold onto ice or money instead of feeling pressured to use them or lose them based on hand size. That said... I did ultimately cut them from the deck. But I miss them sometimes. — KitsuAeryn 8 Jun 2015
In a world with only 2 ICE that rely on a big hand size (Ashigaru and IQ), the effect is still too weak. Then again, why not simply play HB:CI? — Hongkong Koma 16 Jun 2015
I'd consider the Grail ice hand-size dependent as well, to some extent. — LynxMegaCorp 17 Jun 2015