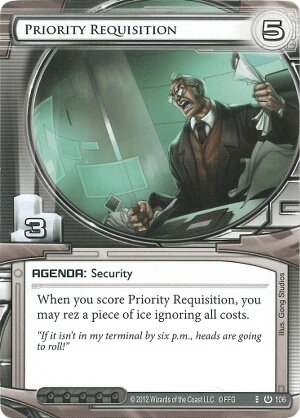 When you score Priority Requisition, you may rez a piece of ice ignoring all costs.

"If it isn't in my terminal by six p.m., heads are going to roll!"
Illustrated by Gong Studios
Decklists with this card

See that angry guy? Yeah, the one holding the paper, with the glasses... When you start playing, you'll think he's yelling at some poor, out-of-shot lackey. You have a little chuckle at the harsh corporate world, thankful that you don't have to be a part of it. Then after a few games you realise - nope, he's yelling at you, he's always been yelling at you. Why? For being a slacker. This card, particularly for new players, will rip you a new one for doing nothing but sitting on your ass and scooping sexbot money. When you lose it, you feel it more than any other agenda in the Core Set. When you score it, you don't feel victorious as much as relieved that you're out of danger. But well done you, have a free Wall of Static as a bonus. It teaches you the hard way that you need to be preparing from the start for when agendas appear, not if. It also teaches you to plan ahead for how you're going to use agenda reward.

Rezzing a low-cost code gate will make you feel like a chump,

And you'll answer, "Um...well sir, I see us maybe discouraging further break-ins with some kind of... tricky crossword puzzle thing?"

"Hmm...fine, get on it. Now get out of my office. You're making me angry at what I might have become."

Rezzing a high-cost one on the other hand...

"Ha! Great work on meeting that deadline Timbo. You really came through - unlike that runner eh?? Haha! ahh.....drink? Being this awesome makes me thirsty. So, anyway, now that we've got all that boring stuff out the way, any thoughts on where we might go from here?"

"Funny you should ask that Geoff. I've actually been working on incorporating a high potency solution, featuring double-redundancies that will force a recurring and unavoidable tax in addition to the basic access denial package necessitated by the modern cyber crime environment. I've already secured the licenses from our media partners."

"My God Timbo you terrify me sometimes. Excellent! I'll leave it all to you then. And by the way why dont you come over for dinner with me and the family on Thursday? We're having moon lobster."

Basically this card was the main reason I started thinking more than a single turn ahead. Like a lot of cards in the Core Set, it will teach you some valuable lessons. In the end you will (probably) be glad you used it. And if you only have the Core Set, good news! You dont have a choice.

Big ICE and low agenda density is what leads players to use this agenda. Five for Three’s are often used to keep the chance of accessing them out of RD lower, and out of many of the five for three’s, Priority Req at least has a chance of being worth some hefty discounts. Rezzing a Hadrian's Wall or Wotan for free is very nice! It is also one of the few ways to rez ICE outside of a run, which can be useful - though trying to score this to prevent a Blackmail run is a very tricky proposition.

It sees play in decks that have big(er) ICE, that want to build big tower servers. There are still so few agendas in the game that often when trying to find a suite of agendas that works well together, sometimes Priority Req just is the only five for three worth it. It is a drag however when all there is to rez with it is a Pop-up Window.

(Breaker Bay era)
lynkfox 366
Worthwhile to note this can be used to rez Archer to ignore the extra cost of forfeiting an agenda. Can be a bit tricky to pull off, but a spectacular payoff if you can — chris_walker 23 Sep 2015
Nice to see a Core deck combo like this. Hadrian's Wall a good alternative to increase likelihood. Archer is intimidating to see rezzed out of turn. Wrote off a server for my build. — ocac 19 Oct 2015
You can also use Bifrost Array to re-fire Priority Requisition in HB Glacier decks. — Zakalwe 21 Mar 2016