Play only if the Corp has at least 1 bad publicity.

Make a run. The Corp cannot rez ice for the duration of this run. 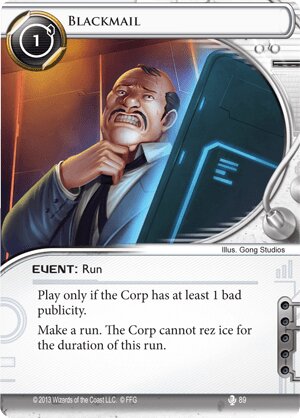 Think of your family

'So you don't want to cycle off the bioroids in section C?... Hmmm remember that "business trip" to Thailand? Perhaps your wife were to see an interesting photo album get posted to your VirtuaBook wall? ... Yeah I thought so, nice doing business with ya." Blackmail that time-honored tradition of paying someone to do something by NOT doing something, translates into Android Netrunner by allowing the runner to bypass all unrezzed ice on a server.

Sling some mud: While some corp decks can produce bad publicity on their own, many do not and Blackmail is a dead card if the corp isn't floating bad publicity. Valencia Estevez: The Angel of Cayambe is by far the most popular way to do so making Blackmail potentially ready to go from turn one. Frame Job , Activist Support etc represent other ways the runner can take matters into his or her own hands to get the party started.

Sooner: Planned Assault is one of several options available to make sure that Blackmail is tutorable sooner rather than later giving the runner the greater opportunity to make a Blackmail when the moment is ripest. Warning!: cards like Blacklist can screw with such a recursion strategy.

Knowledge based decisions: Drive By, Infiltration Silhouette: Stealth Operative are examples of ways the runner could know ahead of time whether a server is indeed worth using Blackmail to push into.

Save : A deeply defended server (say 50 layers of ice) is still only 1 to access. (provided all ice unrezzed)

Surprise: 1-3 well-timed Blackmail runs could potentially end the game perhaps surprising the the corp who thought all that ice out there meant something

Rich corp: Blackmail's ability depends upon the corp not rezzing ice, unfortunately if runner if avoiding opportunities to have the corp rez ice, this can result in the corp being flush with cash and no longer burdened by worrying about economy (this often is not good for the runner)

Ice Rezzing: If the corp get's wind of Blackmail being in the cards, he or she may simply rez ice during the corps turn using cards like Executive Boot Camp Eliza's Toybox, Amazon Industrial Zone, Oversight AI, so the more rezzed ice on a server directly reduces the effectiveness of using Blackmail.

Dead card: If corp is able to clear bad publicity away with Restoring Face, Elizabeth Mills, Rex Campaign, Veterans Program etc then all instances of Blackmail are worthless unless the corp somehow floats bad publicity again.

Blackmail's main limitation being it's requirement of having the corp float at least 1 bad publicity in order to use limits it's appeal in many decks, still under many situations it could potentially be significantly more economical than say Stimhack etc means if the runner is willing to include some kind of bad publicity inducing mechanism into their deck as well it could certainly be viable.

(Data and Destiny era)
chris_walker 638
Executive Boot Camp as a hard counter is worth a mention, as are Elizabeth's Toybox, Amazon Industrial Zone, Oversight AI or anything that allows the Corp to rez on their turn. — GrantZilla1979 22 Dec 2015
False Echo is a pretty obvious combo piece here. Make a blackmail run on unrezzed ice, make the corp pick it up and leave the server naked, then make normal runs to your heart's content (until the corp installs that ice back, of course). — TheNameWasTaken 22 Dec 2015
I don't know if the corp can rez ice unprompted if they suspect blackmails... — Jutranjo 23 Dec 2015
Grant mentioned the possible ways above, but it is important to note that nothing can be done once Blackmail is already underway. They have to be rezzed somehow BEFORE Blackmail is used. — LynxMegaCorp 23 Dec 2015
Thank's GrantZilla1979, the cards you mention help the corp rez cards by saving costs. Corp can rez cards on the corp's turn paying full price without needing these cards too right? That's what I was driving at. Still I've included your suggestions as a way for the corp to save money while rezzing. — chris_walker 23 Dec 2015
Not ICE, which Blackmail affects. — LynxMegaCorp 23 Dec 2015
Thanks TheNameWasTaken, False Echo has been added to the *Melting Ice Away* section. — chris_walker 23 Dec 2015
Chris, the corp cannot rez ice unless the runner encounters it or a card effect allows them to so. I would change the Ice Rezzing Cons section to emphasize that for the corp to rez ice on their turn, they must use the cards that you mention. i.e., rather than saying that "[these are] examples of cards that help the corp do this", perhaps say "[these are] examples of cards that allow the corp to do this". I would also consider mentioning Accelerated Beta Test in this section, as it's a fairly common way for the corp to rez ice on their turn. — forktines 23 Dec 2015
I mentioned those cards not because of the potential credit savings, but because of their action relative to this particular card. Eliza's Toybox has to rez multiple pieces of ICE or a really big one to recoup its investment. Odds are likely that the Runner will kill it before it pays off, but it's notable in its effectiveness at keeping a Blackmail-heavy Valencia deck at bay and giving the Corp some breathing room. — GrantZilla1979 24 Dec 2015
Thanks GrantZilla and Forktines, I've updated the review wording to reflect that cards such as Executive Boot Camp, Eliza's Toybox etc can be used to counter this card and thereby remove any wording that suggests that the corp can rez ice without such cards. — chris_walker 6 Jan 2016
Nothing to add other than I loved reading this. Keep it up! — convoke 10 Feb 2016
Thanks, actually used writing reviews as a way to learn more about the game. Probably going to only do a review about once a month or so, so hopefully others will pick up and fill in reviews for otherwise neglected cards. — chris_walker 21 Feb 2016
This should be probably mentioned that Blackmail, due to MWL 1.2., now costs 3 additional pips a copy regardless of faction. I sincerely hope this is enough to deter people from playing that one ridiculous Valencia archetype. — H0tl1ne 13 Apr 2017