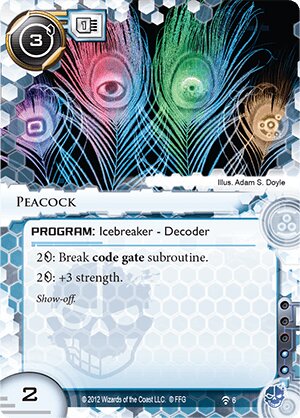 Show-off.
Illustrated by Adam S. Doyle
Decklists with this card

Not much love going around for this card and tbh i don't fully see why sure its not a brilliant Codegate breaker but it's not bad either. With 2 influence you won't be running this out of faction because theirs better but actually compare this to Gordian Blade and look at all the Codegate's it actually performs ok on most ICE and on occasion better.

Compared to all your other in faction breakers its got some good points though its not as good at breaking, it can be used anywhere unlike Passport and compared to Cerberus "Rex" H2 well it don't run out of counters and sometimes cost the same amount.

All in all id say don't just write this off it's generally good enough and with ICE like Wormhole & Gutenberg around it's not that bad.

Cheap to put down

(Breaker Bay era)
Pinkwarrior 2330
You may have meant to say Turing instead of Gutenberg, as Gutenberg is a Sentry and Turing is a Code Gate. I was including a Gordian Blade in most of my crim decks to deal with Turing, until JUST NOW I realized I can use Peacock for Turing on remotes and Passport for Centrals. Influence saver! — PureFlight 31 Jan 2016
2

For original core players, the fact that criminals finally receive a decoder might overjoy some. That is, until the numbers are thoroughly analyzed and players realize that Peacock is only an Aurora with 1 more strength and some short and sweet flavour text.

Ah, but the benefit of a 2-strength decoder is underestimated. Of the 6 code gates in the Revised Core Set, 3 of them are strength 2 or lower and Tollbooth sits nicely at 5 for Peacock's strength boost only needed once. It's the HB bioroids where the feathery bird starts to show its weakness, being inefficient against the former and generally needing two 2 strength boosts to combat the latter.

Final consensus? Peacock already struggles with its strength inefficency but the final nail in the coffin is its 2 cost per subroutine. Notice how the common code gates you run into all have 2 subs and you generally want to be breaking both. Tollbooth may only have 1 sub but it's already got a 3 tax.

Overall, it works in a pinch and is cheap to install, but this shouldn't see any light of day outside of a Criminal deck due to its overall inflexibility. The 2 influence cost on the card just adds insult to injury.