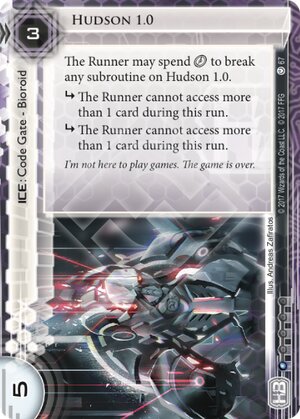 The Runner may spend click to break any subroutine on Hudson 1.0.

I'm not here to play games. The game is over.
Illustrated by Andreas Zafiratos
Decklists with this card

This card was largely panned when it came out. Runners had some multiaccess, but it was not super common. Anarch was weak, so Medium was rare, and the only real multiaccess threats were usually an R&D Interface or two. Most corps took the view "why not just include some ice that actually keeps the runner OUT? Then they access ZERO cards!"

But now, as of this writing, we're two datapacks in to the Mumbad cycle, and I'm starting to seriously wonder if this card's time is coming. First, the obvious - it offers an expensive speed bump to Medium. It won't fully keep them out, but at a better rez:break-cost ratio than even Eli 1.0 this card reduces the utility of multiaccess by quite a bit. It costs 5 to break with Gordian Blade. 6 with ZU.13 Key Master or GS Striker M1.

If the runner is running multiaccess, this card will almost always force a break. Which at a rez cost of 3, is fine by me.

There are also many more upgrades available now than when this card was printed. When this card came out, we had never even HEARD of Caprice Nisei, but now... Forcing the runner to choose between trashing Caprice, and accessing whatever she is guarding, seems like the kind of choice I'd love to force the runner to make. Also works with Ash 2X3ZB9CY and other defensive upgrades.

And it's even only one influence!

I'm not quite there yet. And I can't see myself including more than one or two in a deck. But I think this card is quickly moving from "throw in the card-binder and forget about it" to something that is actually worth considering for serious decks.

(Business First era)
Bwob 480
I feel like you forgot to mention the most important break cost ... 4 cards for Faust! — Ber 15 Mar 2016
It's a solid R&D taxer. I've never regretted putting it in any of my decks, and it's about the only card I've ever landed a Heinlein Grid off of. — GrantZilla1979 15 Mar 2016
I definitely agree. The flexibility (viable on a central or remote server) and the tax to Faust and Parasite make a comeback in the near future definitely possible for Hudson! — HuskerDu 5 Apr 2016
I've played around with Hudson a bit, often as a 1-of bc I liked the concept. It - excuse me - HE is obviously made to tax, and he is very effective at it. I think you just have to have a very specific game plan for him: either you're guarding your upgrades in a scoring remote, or you're making Medium Digs and RDI/Makers runs very economically unappealing. 4 — PureFlight 13 Jun 2016
4

So this card survived the rotation now that it is in the new core set. This piece of ice is not the easiest sell. The general consensus was that this card doesn't do enough. That is to say, compare and contrast this ice with a code gate that just ends the run.

On the bright side, you pay a measly three credits for 5 strength and two subroutines. This is a good rate. The drawbacks is that if need be, the runner can click through this ice and the two subroutines do not do anything if the runner isn't going to access multiple cards.

This makes this ice very niche. You would run this to turn off multi-access on R&D or HQ. The problem there is that it won't stop the runner in a high-value run with The Maker's Eye or Deep Data Mining. In addition, for the purpose of R&D and HQ multi-access, Crisium Grid would do a better job.

(Crimson Dust era)
Severijn 534
One thought I keep having is Hudson might fit well as a cheap archives ice to slow the speed that agendas can be stolen after flood or milling. Allowing later retrieval with Preemptive Action, Archived Memories or similar, that's it's probable intent. — Amputret 15 Oct 2017
The multicard remote and archives synergy is really nice! Installing Wetwork Refit on it too would give it a bite and still be insanely efficient. — cinnadream 18 Oct 2017
2

Hudson is a first series Bioroid, thus each of his two subroutines can be broken for a click. Both subroutines prevent the Runner from accessing more than one card from a successful run. While possibly best serving to protect a central such as HQ or R&D, he has potential for amusing tricks on a remote server as well.

• High strength to rez cost ratio, right where you want your Code Gates to be. Multiple subroutines is also beneficial, unless facing a Grappling Hook.

• Outside native Yog.0 range, but vulnerable to Yogosaurus.

• One influence is highly splashable into other factions.

• Doesn't care where the multi-access is coming from - Run event, virus or Interface - he will prevent any more than one access.

• Like all 1.0 series Bioroids, he's click breakable and a determined Runner will be able to punch through.

• Within D4v1d range, although unless combined with an e3 Feedback Implants, this is an expensive drain on the program's counters.

• No end the run subroutine, so if the Runner only cares to access one card, Hudson is just ignored.

• Like all Bioroids, Hudson combined with Heinlein Grid is going to cost the Runner all their credits if they choose to spend a click breaking his subroutines.

• Obviously Stronger Together makes for a 3 rez, 6 strength Code Gate, which is an excellent strength:rez ratio.

• Project Wotan agenda counters can make a highly expensive "end the run" subroutine if the Runner has no clicks left. • If the Runner accesses Toshiyuki Sakai and then Sakai bounces, the newly installed card may not be accessed, making a safe Agenda install possible.

• Can make for a surprising rez when Noise is running the Archives intent on stealing multiple Agenda, buying time to Jackson Howard them back or shore up defences.