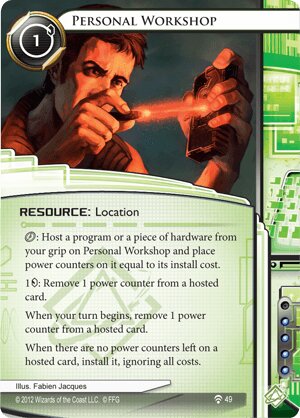 click: Host a program or piece of hardware from your grip on Personal Workshop and place power counters on it equal to its install cost.

When your turn begins, remove 1 power counter from a hosted card.

When there are no power counters left on a hosted card, install it, ignoring all costs.

Illustrated by Fabien Jacques
Decklists with this card

Despite the huge Influence hit, this card is amazing in Noise decks. Stack a virus on it, run their R&D with Medium, and remember how many cards they've drawn. When the Corp is about the draw the card you don't want them to have but couldn't get rid of, use the Workshop to play the virus (it doesn't matter which, but I prefer Imp). This triggers Noise's ID ability and sends the offending card to the Archives before it can be drawn. Loads of fun!

An absolute must for Nasir Meidan: Cyber Explorer decks. Perhaps no other card is as mandatory for any ID as this is for Nasir - critical to allow him to spend his money mid-run before losing it. Also serves as powerful drip econ for any runner looking to build up a lot of programs and hardware.

Also great synergy with Parasite, allowing you to "pre-load" it to be used on freshly rezzed ICE (and then destroy those ice mid-run with Datasuckers or Wyrm) be careful, though, as the "drip" on workshop is not optional, so if the corp does not rez a good parasite target in the next 2 turns, you may be forced to install it sub-optimally.

This card has pretty significant anti-synergy with Kate "Mac" McCaffrey: Digital Tinker, as installing a card off the workshop uses up her ability without gaining any benefit. Likewise, it can be a great counter to Housekeeping as you can pile many turns worth of "installs" onto it and then install them all in one quick burst, thus only triggering Housekeeping once.

One last thing to note is that it is not unique - if you truly have a lot to build, you can install more than one and get the "drip" going on more than one project at a time. for this reason it is sometimes not best to overload a single workshop unless you simply must get the cards out of your hand.

(Order and Chaos era)
voltorocks 201
Can someone tell me if this card which says 'ignoring all costs' also ignores the Memory cost of programs? — Runly 22 Jul 2015
@Runly - Memory is never considered a 'cost' for installation purposes. Ignoring all costs implies the installation cost through credits, (located at the top left of the card), and any card text that reads "as an additional cost to install this program/hardware..." — Mechanoise 31 Jul 2015
So no matter how many cards you have installed on it, only one gets the start of turn removal, correct? — Vimes 15 Aug 2015
@Vimes That is correct. If there are, say, three cards hosted on it, only one counter from one card is removed at the start of your turn. — slobad31 9 Oct 2015
For extra lulz, use with Stimhack. — H0tl1ne 15 Mar 2016
3

What a workhorse of a card. Previous reviews have hit on some great points, I'd just like to add a little of my own experience using this with Hayley Kaplan: Universal Scholar. As many people know, triggering Hayley's ability on your opponents turn is a powerful way to double down on her speed. There are plenty of ways to do that; Clone Chip, Self-modifying Code, Artist Colony, Street Peddler to name a few. Oh, and of course, Personal Workshop.

A popular strategy with Hayley is to stuff your deck full of 0 cost resources, programs, and to a lesser extent, hardware. If you aren't getting any value of these investments you can always sell them to Aesop. 0 cost programs and hardware do not work with Personal Workshop though, so we need to move up in cost. Luckily that is right where we we find some of the most useful Shaper (and often imported) tools. Clone Chip, Hyperdriver, Astrolabe, NetChip, Cache, Datasucker, and many more. Sticking these on the workshop will allow you to pull them off for free on your turn, or spend a credit on your opponent's turn so that you can maximize Hayley's ability.

So you are gaining some clicks, and saving some credits. Not to mention Personal Workshops usual utility goodness of taking stuff off when you need it, such as mid run (Parasite, Atman) or when the corp wants to fast advance (#Clot). That's all great, but if you really want to maximize your workshops, try throwing Technical Writer into your deck as well. You know those games where you start out with a Writer or two in you hand? By mid-game they are exploding with credits. Well, Personal Workshop lets you have those kind of games a lot more often. You can load up your Workshops and then wait until you've found a few Technical Writers. Stall by taking counters off your big things and leave everything else at one counter. Then you choose whether to unload everything at once and then recoup your losses with a Writer, or you can slowly take everything off and save more credits over the long term.

Altogether this makes for an incredible economy engine. Throw in some Diesel and Hyperdrivers and it sets up quickly too. I highly recommend Aesop's Pawnshop with this economy package. With Aesop's and Personal Workshop powering your game you can make some huge tempo plays (Hyperdriver on NetChip anyone?) and then get rich by selling off anything left over. Have fun!