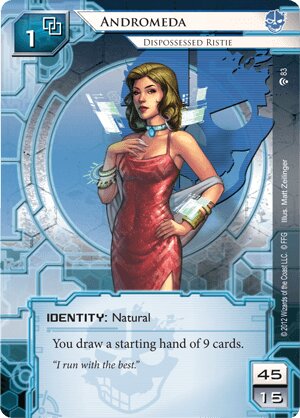 You draw a starting hand of 9 cards.

"I run with the best."
Illustrated by Matt Zeilinger
Decklists with this card

Andromeda is my favorite Criminal Runner. Unlike most every Runner out there with the exception of The Professor, she is the only Runner whose effect goes off before the game starts.

Drawing nine cards instead of five before the game starts seems trivial to new players. "Why would I want to draw 9 cards when I could have someone with an ongoing effect?" is a question I hear a lot from people I teach Netrunner to. But it is such a powerful effect in reality. And why is it so powerful? You draw 1/5th of your deck for your opening hand. 36 cards will remain in your deck if playing at the 45 cards minimum. Not only did you just thin your deck out like crazy, you just saw what pieces you still need to get the party started.

Chances are high of you seeing some breakers or ways of getting those breakers in that opening hand. Chances are high of you hitting a Sure Gamble or other econ in that opening hand. Chances of you getting that Desperado out early are high. And that is what Andromeda excels at: if there is something you want to see early on, you have a much higher chance of getting it for Turn 1 than with other Runners. Unlike in other decks where you want to run 3x of a card, you can get away with 2x in Andy (but man, is 3x of a card in Andy a whopper; you are gonna see that card much earlier than normal).

Andy decks typically work best when there are some pieces that you want to find early like Dyson Mem Chip and Underworld Contact for example, so you can set up an economic package quickly then focus on getting your breaker suite out. Desperado/Security Testing is another excellent choice in Andromeda, since the chances of hitting both early on are increased greatly.

At the time of writing, Anarchs and Shapers are much better than Criminals IMO. But I think a case should still be made for Andromeda as being the best that Criminals have to offer right now next to Leela Patel: Trained Pragmatist. She's a versatile Runner. As a player, I don't feel chained down to one strategy with her like with Iain Stirling: Retired Spook or Gabriel Santiago: Consummate Professional. She is the "wild card" of the Criminals and one could do just about any strategy with her that they would want to. Want to go all in on Net-Ready Eyes? She helps you find the pieces faster. Want to run a connections/resource economy? She helps you find the pieces faster. If you want to melt through ICE with the Andysucker style deck, chances are pretty darn good of you finding Datasucker early on.

While Andromeda may not be the best Runner to teach with (Gabe is great for teaching how Runs are made, he's a solid beginner's choice for a Runner), once someone knows the mechanics of the game I would argue that Andromeda should be a Criminal beginner's next choice.

(Chrome City era)
WardOfTheWoods 698
Another way to thin out your deck is to use a smaller deck size. — NobbyNobs 17 Jan 2016
Five out of forty isn't better than Nine out of 45. That's just math.There is nothing better for consistency than having many more cards in hand on turn 1. A 5/40 blank has to have something else good to make up for a 9/45 blank for sure. — Raiddinn 19 Apr 2016