When your turn begins, gain 2credit if the Corp has more scored agenda points than you. 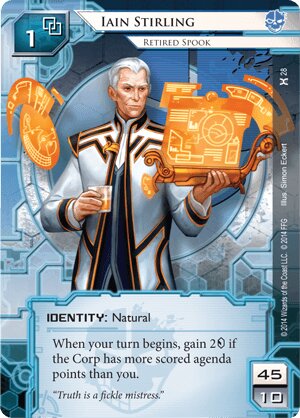 With a crippling 10 influence limit, you have to be willing to let the Corporation score some agendas to take full advantage of this identity. If you want to play aggressively and run early and often, switch your identity to Andromeda: Dispossessed Ristie and you'll be able to build a better deck with more out-of-faction cards.

That said, Iain is best played in control decks that spend the first several turns installing resources and establishing a drip economy. Your opponent will be left with a difficult decision, try to score out quickly and accelerate your economy with a 2 credit drip, or postpone scoring as long as possible and build their own fortress. Your goal should be to build a deck that can capitalize on either decision. Cards like Logos and Fan Site (with Data Dealer) trigger when the corp scores and give you the tools or cash you need to crack their servers or improve your board state. Should the corp choose the fast advance route, Iain can prolong the game without scoring using The Source or Account Siphon to take full advantage of the per-turn drip.

Eventually you will need to score agendas and win the game, but a good Iain deck should be able to let the corp score 4-5 points while having the end game economy to completely shut down the corp's efforts to do anything other than wait patiently for you to score 7 points.

(Old Hollywood era)
Tozar 685
Score agenda's to win the game? Score agenda's to sell to Data Dealer! The corp can't win without their Agenda's, so you win by default. (a really jank-tactic though) — Voron 21 Aug 2015
One saving grace is that he has access to Special Order and Hostage, so he can tutor 1-ofs to save influence. — LynxMegaCorp 21 Aug 2015
Hostage is great for Stirling and Helpful AI may be a good addition for a connection that adds link to activate those Underworld Contacts. Hostage is also good for bringing out Kati and Mr Li, saving you deck space as you only need one copy of those cards. — catch8088 21 Aug 2015
Film Critic may open a new kind of playstyle for Iain; leveraging criminals' early aggression tools to host agenda(s) on Film Critic(s) to avoid turning off your own ID ability. Score off Film Critic only when you have 7. — zzzzzuu 21 Aug 2015
Each Film Critic hosts one agenda at a time. So its hard to hold onto many agendas. Still a good tactic for Iain! — LynxMegaCorp 21 Aug 2015
1

Less a review and more a thought: with his base link, Iain's a "cloud-compatible" runner. The drip economy when behind compensates for the relatively slow setup time of the criminal cloud suite (Shiv, Spike and Crowbar).

Also e3 Feedback Implants is in faction, allowing for maximum exploitation of the criminal cloud and Creeper (and suggests some Grappling Hook shenanigans, depending on how hard you want to commit to e3 usage).

(Old Hollywood era)
JohnnyMilton 1015
When you're criminal and import a killer from shaper you're doing something wrong. — Capstone 10 Sep 2015
Yeah, if you're going to import a Killer then make it Shrike instead. In fact, Sunny's breakers are worth considering purely because they're great for late game Runners with a big credit pile. — LordRandomness 6 Jun 2016