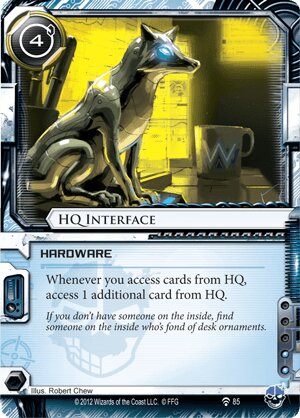 (Data and Destiny era)
chris_walker 685
HQ Interface also has massive synergy with Gang Sign, a great inclusion in pretty much any criminal deck, as well as Raymond Flint (who I think will see more use soon as the Mumbad Cycle looks like it plays more with bad publicity). — FarCryFromHuman 2 Nov 2015
HQI is also an amazing addition to any Edward Kim deck, IMO. It really is a must have for our vengeful Anarch friend. As crazy as it sounds, I've had a lot of success with Kim in the past few months. No matter what, though, the more consistent chances you give yourself to trash their Shipment from SanSan, Scorched Earth, Midseasons...hell, even their currents and econ...the better shot you have at getting in wherever you want late game. HQI does that for you. — esutter479 2 Nov 2015
Also notable is that - unlike Legwork - it combos with Sneakdoor Beta. — MasterPrudent 12 Feb 2016
1