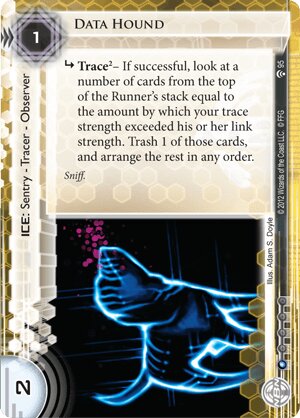 subroutine Trace [2]– If successful, look at a number of cards from the top of the Runner's stack equal to the amount by which your trace strength exceeded his or her link strength. Trash 1 of those cards, and arrange the rest in any order.

Sniff.
Illustrated by Adam S. Doyle
Decklists with this card

I've never give this one a try, neither seen it on any table (as far as I remember). So the reasons I expose here are just an educated guess for why it doesn't see play, but it doesn't seem hard to find.

Why would the Corp spend money to dig through the stack only to choose one card to trash ? Ok, they can order the drawn cards as they want, but still.

Why would the Runner prefer to pay any instead of trashing one not-yet-drawn card ? Not confident enough in their deck ? And then, a not-very-frightening sentry stand on the table, that can be passed through with few threats.

And also, why, why, oh god WHY, does this dog appear on Emergency Shutdown ? Has Data Hound ever been the chosen ice for this ability ? If you have witnessed such a madness, or even made it, just tell us. We want to know.

(Data and Destiny era)
Lupus Yonderboi 243
While unreliable, it also improves Targeted Marketing and is anti-I've Had Worse... — LynxMegaCorp 17 Nov 2015
it also lets you trash tools while burying card draw and tutors and leaving expensive stuff in the hand without access to the credits to afford to use them. The issue really is low trace and low strength. At it's best it's a 1 credit tax on Mimic. At it's worst, the corp goes broke while the runner has wanted tools already in hand. — Goldstep 17 Nov 2015
2

After he essentially won me a game, I feel like I have to make a stance here for the poor little doggy.

For 1 rez cost it can tax the runner 1 or 2 to pass it unharmed. Pup is another dog that is praised for doing the same thing. And for what it does, 2 strength makes it pretty resistant against Parasites compared to other "tax the runner a little and let him through" ICE like Pop-up Window. So if it is broken or the trace is matched, it's a nice little porous taxing ICE. There will always be need for that.

But what if the runner just ignores it? Well, that's exactly what you want him to do. Put this thing on a server they check regularly and you basically get a Stack lock similar to an R&D lock, but on the other side of the table. You filter what they will draw and trash the cards you don't want them to see. So it grants you both milling and information.
The milling can be good in decks that want to exhaust the runner's resources and the information can come in quite handy in a lot of decks, but is especially good when combined with Targeted Marketing in-faction, because you know what they will draw before they do and have time to set up accordingly.

All in all it's an okay ICE, that can be a small tax or a small advantage for a very small price. Until Improved Tracers hits the table.
The agenda itself is awesome, but it's even better when combined with a whole lot of cheap small nuisance Tracer ICE like Data Hound, Turnpike or Matrix Analyzer. It won't stop anyone, but they better pay the tax or face the consequences.

(Data and Destiny era)
Krams 939
I also like him a lot. I even have it in my HB glacier deck (but I don't have all the expansions) and just for the info. — valerian32 26 Nov 2015
I don't see how Data Hound can be a 2c tax. Untargeted "mill 1" is useless unless your game plan involves milling the runner out entirely, and if your opponent has recursion, it actively helps them. So the corp needs to win the trace by at least two for Data Hound to matter. Thus it is only ever a 1+X credit tax, where X is the number of credits the corp spends. 1 link runners are taxed no more than the corp. — RS14 27 Nov 2015
It an be a 2 cred tax if the runner doesn't use Mimic as their killer and wants to break it or if the runner has 0 link and wants to beat the trace. Because even if it just estroys the top card that's still a nice effect. Pepople include Underway Renovation as a 3/1 agenda just to do that. The runner has put those cards in his deck for a reason! Of course, against super recursion heavy MaxX decks it's not helpful to mill them, but it can be against a lot of runners. — Krams 27 Nov 2015
Approximately nobody is including Underway Renovation in their decks, and literally nobody is winning even game nights with it. I checked. It's a goofy agenda that does a unique, goofy thing, which is fine, but it's nowhere close to being a good card. Answer this: how many times do you see the runner use up their entire stack (without having Levy)? Because if you don't mill their entire stack with Data Hound, or at least threaten it, "trash the top card of the runner's stack" might as well read "put the top card of the runner's stack on the bottom of their stack". Except in almost all Shaper and Anarch matchups, it's worse, because it turns their Clone Chips and Deja Vu's into tutors. The only decks I can ever see wanting to match the trace (rather than trace-1) are those with tutors, no recursion, and singleton breakers. And even those will just ignore it completely once they're set up. — RS14 27 Nov 2015
Not everyone has recursion and certainly not for every card type. Recurring hardware or resources is quite uncommon as it requires general recursion tools, which have their limitations. To answer your question: More often than I suspected. Stacks run empty, it happens. Most of the time against rig destruction or net damage decks. Usually not against NBN, I have to admit. But there's still the possibility of building a Keegan Lane based rigshooter out of NBN and then it would be not too shabby to have the runner burn through some of their (limited) recursion tools to get back stuff Data Hound trashed. I never said it's a great ICE. It's certainly not good for every deck and it's certainly not good against every matchup. But if your deck is already running cards like NBN: Making News or Rutherford Grid or Improved Tracers and is not aimed at playing a short game, it can easily be be worth it's deck slot. And the rez cost is basically worth it after one or two encounters. I have tested this ICE and was surprised as it won me a game. — Krams 27 Nov 2015