Name a card. Gain 10credit whenever the Runner plays or installs a copy of that card. 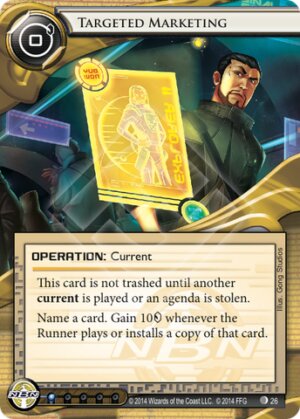 Slowly, I think this card is coming into its own and getting the respect it deserves. It's not for every deck, but it's definitely for some.

For those of you who doubt the one true advertising god, imagine this hypothetical card:

Ridiculous and overpowered, right? But what experience has shown us is that Targeted Marketing often has the same effect as the above card. 10 is a ridiculous sum of money to just hand over to the corporation, even to unlock your best card, and many runners will only make that sacrifice if it's a difference between life and death.

Thus, Targeted Marketing's function in your deck is not to gain you money, but rather, to gain you tempo. It's the closest Netrunner has gotten us (though Snatch and Grab is close) to an unlimited corp tool for screwing around with the runner, until the runner scores an agenda or finally snaps, and the longer the runner is put off from getting their engine running, the longer you have to prepare for the midgame.

But before you go shoving it into every deck you have, a few things to keep in mind about the one true advertising god:

And that in turn points to one of the paradoxes of TM: you'll almost never perceive the ways it's helping you win. All you can do is put it in your deck and try to feel the waves of rage emanating from your opponent. Wear sunscreen.

(Breaker Bay era)
greyfield 3825
Or you could utilize cards like Will o' the Wisp, Sherlock 1.0, Markus 1.0, Data Hound, Information Overload, Snoop, Invasion of Privacy, and Scorched Earth (the threat of it, at the very least, then claim Plascrete Carapace), to edge yourself closer to gaining those credits. Did I miss any synergistic cards? — LynxMegaCorp 13 May 2015
how does this interact with I've had worse? if you force then to discard it, did they play it? — KitsuAeryn 13 May 2015
I would say no, since playing a card happens on your own turn using a click. IHW's proc happens through a condition being met, and is a 'reaction' effect instead of a played effect (for example, playing it to draw 3). I hope I explained that appropriately. — LynxMegaCorp 14 May 2015
This is still not a card for the newcomer and not a card to use against someone you don't know. I've seen it used a few times to literally no effect. You see Noise and Wyldside and pick Aesop's only to have the person play Chop-Bot the next turn, or pick PPVP against Kate only to hear the runner say "Gosh, I wish I had that card. I can't find a copy of Second Thoughts." — Goldstep 16 May 2015
Oh, undoubtedly. I still miss (that is, pick a card they aren't playing) at least a third of the time. That's the cost of doing business. But the way I see it, if I pick a card they haven't drawn yet, that just confirms their start is slow, and I can feel confident I'm still securing a tempo gain. That's why I emphasize not to worry about getting it "right". For example, the deck I play TM in, and which inspired this review, is strongly favored so long as it doesn't lose an agenda in the first three to five turns. Playing TM helps either slow the runner down enough to get out of that window, or confirm they're not going fast enough anyway, which lets me feel more comfortable playing dangerously. But you're absolutely right - you should only play this card if, like me, you obsessively check the Popular decks tab on this site. — greyfield 16 May 2015
Does anyone know how this interacts with "Rumor Mill"? — meterpaffay 2 Oct 2016
Rumor Mill is a current. Targeted Marketing is a current. Playing one removes the other. — Trevyn 26 Apr 2017
6

This card combos really nicely with the new Jinteki ID Chronos Protocol: Selective Mind-mapping. Score a net damage (with a Neural EMP perhaps) and kill their best card. Then play Targeted Marketing and name one of the other cards in their hand.

Need to dump this card before you can get any net damage off? Just name Account Siphon (or whatever other card would mess up your plans the worst).

(The Universe of Tomorrow era)
jdharper 94