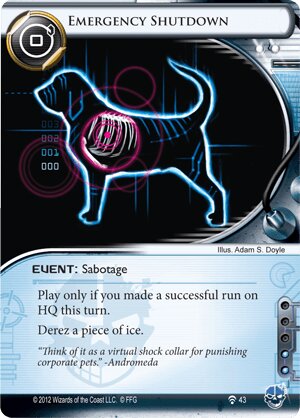 "Think of it as a virtual shock collar for punishing corporate pets." -Andromeda
Illustrated by Adam S. Doyle
Decklists with this card

(Quorum era)
Raiddinn 55
Calling this a win-more card seems a bit short-sighted. Certainly if you're rich and they're poor, or vice versa, it's less useful. But if your'e fighting an even financial battle with the corp, and land a shutdown on a large ice, that's quite a swing. — MrAaronSA 10 Feb 2017
Someone who's installing Sneakdoor Beta isn't doing it JUST for Emergency Shutdown. — LynxMegaCorp 11 Feb 2017
https://stimhack.com/why-win-more-is-not-a-problem-in-netrunner/ — Pink 1 Nov 2017
2

Tranquilizer can´t be trashed by getting tagged?