X is the number of virus counters on Darwin.

When your turn begins, you may pay 1credit to place 1 virus counter on Darwin. 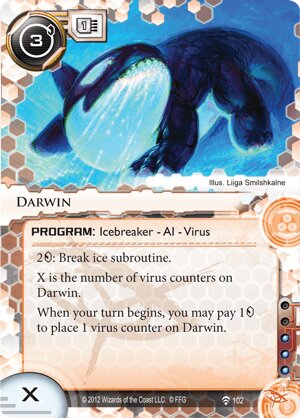 Darwin is a cute little program that does very well in a few niche Anarch decks that rely on a heavy virus suite. To make Darwin effective, you have to combine him with Virus Breeding Ground and run 3 Cyberfeeders. His evolution then jumps in speed from crocodile to Pokemon. Take one free credit from Cyberfeeder, click to transfer another virus counters or two and he's suddenly a Strenght 2 or 3, threatening most Ice on the board. Darwin gets a lot of benefit from e3 Feedback Implants, as well as Hivemind and obviously Grimoire.

Run him in a virus deck with Noise: Hacker Extraordinaire or Quetzal: Free Spirit and you'll be amazed at how versatile and useful he can be when given the proper support to evolve. You might want to run a few Festers, though, as the Corp will purge you quite often.

(Order and Chaos era)
Xh4rx4d 21
It's worth adding #Surge to the list of Darwin's synergistic cards. After 1 turn, Darwin can be at Strength 3. In the first several turns of a game, this can be substantial; Darwin can combat most cheap ETR ice before the corp has its large ice (or the economy for large ice) in play. — PureFlight 25 Mar 2015
Link to [Surge](/en/card/02081) ( @PureFlight ) — nickv2002 26 Mar 2015
Nope that didn't work either... guess card links don't work in these comments yet... — nickv2002 26 Mar 2015
Hivemind deserves more than a casual mention here - in fact it's the main reason darwin is seeing play again. If you're unning any sort of hivemind engine (using progenitor, hivemind, and virus breeding ground to fuel powerful but otherwise hard to use viruses like chakana, deep thought, gorman drip, pheremones... etc. etc) Then Darwin is the breaker for you. since these builds tend to keep 3-5 or more counters on hivemind, even a click one darwin can be used to break just about any ICE. — voltorocks 26 Mar 2015
I've never liked trying to bulk Darwin up -- it's too fragile, expensive, and time-consuming. I think Darwin works best in a deck that's already using Datasuckers and Parasites to handle threats -- he's a great supplement in such a deck, and works without much investment in his strength. — KitsuAeryn 26 Mar 2015
Is Cyberfeeder just for his breaking ability or can you actually use it to put counters on him? — DapperGentlemancer 21 Dec 2015
Yes, you can, because it is counting as "using icebreakers". — Qazan 22 Dec 2015