Play only if the Runner stole an agenda during his or her last turn.

Trace [6]– If successful, give the Runner tags equal to the amount by which your trace strength exceeded his or her link strength. 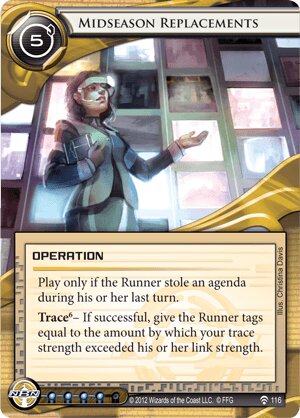 I've come to seriously hate this card. The only card I can think of that is more OP is astroscript. The ability to give the runner 2, 5, 10 tags in one click is ridiculous. True you need to have a good amount of money but that doesn't seem to be a problem. From what I've seen, players like to put up a token defense on hq and r&d, such as errand boy and popup. Meanwhile they just sit back and gain money; and cards with jackson until they have the 3 cards they need. They pray the whole time that the runner doesn't get lucky with their runs, but it doesn't really every happen; its hard to get 7 points before the corp is ready to go. The only good defense is having a crap ton of money but that usually won't happen if you are running. And if you don't run, then the corp scores astro and you lose the old fashioned way. So you run, hit a NYPD and are obliged to steal it, leaving you with no money. The only card that is effective against it is paper tripping, and then only if you are still in the game next turn. Plascrete of course is a must if they are going the meat damage route and not pysco; but it won't hold up to a couple traffic accidents and scorched earths. I suppose clot could save the day in some situations. I feel it should be a double operation with a trace 2 or something. Still good but requires the corp to have A LOT of money.

(Chrome City era)
quailman2101 252
Small correction: If you hit an NAPD you don't actually HAVE to steal it. Other agendas that don't have an additional cost do indeed require you to steal them (unless you use Imp), but you are able to decline to steal NAPD. Indeed, if you're playing against Butchershop (which it seems you are), it's often a good idea to decline to steal them unless you're swimming in money. — Spaceman_Spiff 18 Jun 2015
This card is balanced by being expensive and difficult to play. You're only going to steal an agenda 3 or 4 times most games, and the corp needs to have 1) the card and 2) the cash on-hand when you do so. It's played on the Runner's terms, not the Corp's. It's still a strong card, but in my eyes it's nowhere near as game-shattering as Astroscript. — KitsuAeryn 18 Jun 2015
I actually feel this card should be a double. If only to limit the Corp's choices on the same turn (double Plascrete, Shoot The Moon). Would still allow other events. — LynxMegaCorp 18 Jun 2015
I didn't realize that you weren't obligated to steal napd contract, that is very nice to know. Thanks! Also, awesome pseudonym spiff! — quailman2101 19 Jun 2015
You forgot the worst part of mid-seasons, it's interaction with a double-advanced breaking news. So ... do you want to die because you took this and I mid-seasoned you or do you want to die because you didn't take it ... But at least things only get worse with exploda-pa-looza — sruman 19 Jun 2015
True that — quailman2101 21 Jul 2015
If the runner stole agenda from a gang sign access on HQ. Could the corp use midseason replacements on their next turn? The runner technically stole the agenda during the corp's turn. — Santa34 5 Aug 2015
As far as I am aware, no. The card specifies "play only if the runner stole an agenda during his or her last turn". It is very specific. — Phoenix 11 Jan 2016
4

I got 25 tags on turn 3 versus a blue sun deck. They got Curtain Wall and used Oversight AI twice. What am I meant to do, not steal agendas? Play a tag me deck? Plascrete Carapace is just going to delay the inevitable, and corp has too much recursion, so even if their BOOM! or Scorched Earth fails, you still have 20+ tags that you will never get rid of, so they can just do their kill combo later. Even if they don't do a kill combo, Psychographics will win them the game and stuff like Closed Accounts will destroy you even harder.

Even if they don't have the ridiculous credit power of Blue Sun: Powering the Future, you can still acquire an un-salvageable amount of tags. A card of this caliber that can give you 10+ tags shouldn't exist. It's not even a terminal or even a double operation!

On top of that, the corp can just sit back, gain credits and draw. Who cares about icing up your central servers? If they draw into agendas, good for them, more chance of the runner stealing one as they are meant to, and then you punish and completely cripple them. This sort of playstyle just makes me infuriated. It's so unsatisfying and it really makes me mad, because it's so cheap and easy and it has ruined the game for me.

Honestly a stupid card, it shouldn't exist. If you play this card or the blue sun combo, good for you. Hope you're having fun.

(Martial Law era)
Sympax 46
Yes, this is a strong card. But it's also a high-cost high-inf card with very restricted usage. And there ARE a lot of ways to play around it. Simply being richer than the Corp shuts down this card hard. Link also helps a lot. Film Critic allows you to not 'steal' and still get points. Playing tag-me is always an option, especially with strong cards like Obelus supporting the concept. There are tag removal cards like Lawyer Up, Paper Tripping, Networking, Misdirection or tag avoiding effects like Decoy, On the Lam, Forger. And last but not least: Tags alone don't win games. The Corp still has to actually use them for their win condition (like Psycho-Beale or Boom!) and until then you have time to implement your own plans. — Krams 9 Jan 2017
Out-Money them before you steal? — pang4 9 Jan 2017
This will be over soon. The rotation is almost there. — H0tl1ne 9 Jan 2017
There are certain cards that when played make it feel like a tiny part of you is apologising, and this is definitely one of them. — Tirranek 9 Jan 2017
I am NOT a fan of swing cards. This is definitely the epitome of swing. At *least* Hard-Hitting News is limited to four tags and has a few more viable outs not called Paper Tripping. — LynxMegaCorp 9 Jan 2017
A reviewer after my heart! I hate this card and I hate Blue Sun. Can't wait 'til they are both gone. — quailman2101 9 Jan 2017
Time to play Paper Tripping! :V — LordRandomness 9 Jan 2017
Magnum Opus + Misdirection. Check and mate. — pang4 10 Jan 2017
Those are nice SHAPER cards, there. The fact that you're running Misdirection JUST to deal with Midseasons isn't fun, even if it helps a little against HHN. — LynxMegaCorp 10 Jan 2017
The fact that you're running Plascrete JUST to deal with BOOM! isn't fun, even if it helps a little against Scorched. Is that the argument here? That we should never play hate cards? — pang4 11 Jan 2017
> You < — LynxMegaCorp 11 Jan 2017
> Point < — LynxMegaCorp 11 Jan 2017
Slight difference, there. My examples are Shaper - yours are neutral. I thought that much was clear? — LynxMegaCorp 11 Jan 2017
In chess, there is a proverb that reads 'the threat is better than its execution'. The simple fact that this card exists makes the game interesting, as you can fear it even if the corp does not play it (especially in non-NBN as it has 4 influence). A couple of things to consider : It recommends that you get richer than the corp before stealing an agenda (it's a trace). If it did not exist, New Angeles City Hall would really be overpowered (see how it manages SEA Source and Hard-Hitting News). Usually the corp gets poor post-midseasons, so it's up to your ability to recover (similarly, a corp has to recover from Vamp). Film Critic saves the day. Yet I fully understand the rationale of your review as we all suffered from - and hated - this card at least once. — Him 12 Jan 2017