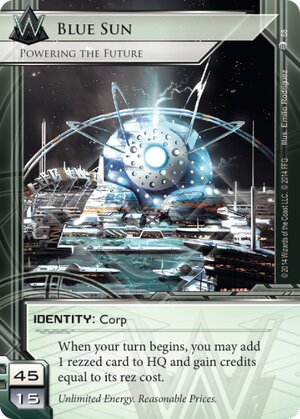 When your turn begins, you may add 1 rezzed card to HQ and gain credits equal to its rez cost.

Long anticipated, spoiled a long time ago. Here we go:

At a standard use this is not an economy card: Gaining back the money you previously paid while returning a rezzed card you had installed has a name: lose a click!

Yet it opens doors for shenanigans:

To play this ID at full capacity (each turn), you have to consider you're playing with 2 clicks a turn instead of 3.

But it can be considered from an uneconomical point of view. It can:

So this ID allows many shenanigans, and I really appreciate that - just like the Foundry, it introduces a new way to play the game. It's not just an extra boost for a unidimensional race (Etf, KBWBI etc...)/

But to me, Blue Sun is optimized in constantly rebooting drip economy assets.

It allows to reboot counters on install cards. It is awesome with Eve Campaign: When Eve has 2 credits left and your turn begins, instead of gaining 2 and trashing Eve, return it to HQ and gain 5. Use these 5 to re-install Eve and enjoy 7 more turns of money.

Looking at the card from the perspective of someone who is quite new to A:NR, Blue Sun: Powering the Future gives the Corp player a lot of control in how to accelerate their economy without compromising their Ice layer. A first turn Hedge Fund into an installed Tollbooth over R&D is a perfect example of a credit sink, and provided you have powerful, unrezzed Ice over R&D, you are effectively immune to Account Siphon and Vamp, even if they break your Ice. The ability to protect your centrals (Or even remotes) with powerful Ice, without actually having to make bigger overtures towards recovering your economy, cannot be understated in my eyes. The impression I get is that rezzing an Assassin in front of someone early is likely going to discourage early runs, or at the very least, heavily tax the runner on Traces. I think the top review covers the majority of things you can do with Blue Sun: Powering the Future, but I wanted to add the fact you're able to better balance your Ice defences with maintaining a steady economy, which can potentially hamstring a Runner by placing very obnoxious effects in front of them earlier than they are realistically prepared for.

(Data and Destiny era)
FatalSource 6
All good points. Also take notice that the corp can effectively recover their credits from high rez cost ICE, and shift their power ICE around to keep the runner guessing which servers they will be able to get into. Recovering credits and information is very powerful in the glacier builds that Blue Sun is utilized in. Finally, as a Weyland ID, being able to recover 8-14 credits on the turn the corp will SEA Scorch on can turn the tides of a game very rapidly. — bubbathegoat 6 Jan 2016
Hedge Fund brings up a good point, namely that Blue Sun makes it and bigger brother Restructure much safer since you can simply return a high cost card to afford the economy boost, then re-play the card in a pinch. Not optimal, but much better than sitting around with dead economy cards and no credits. — LordRandomness 7 Jan 2016
2

I really think Blue Sun is overpowered. I hate playing against it. The money a player can make playing blue sun is ridiculous. Oversight plus curtain wall a couple times early game before the runner is set up gives a cool 13 credits. There is some risk but not a lot. The big one is breaker bay grid plus adonis campaign. The corp can gain 7 credits in one click every turn. True they need to protect a server but if they get this out early they can afford to protect all their servers with taxing ice. There are other ways too. And once they got the money it's pretty much game over. They will either let you get an agenda and double counterstrike you, or go for a crisium and off the grid win. Then too as noted above, this id makes parasites, caissas, and femmes all but useless. This id makes grail ice quite hard to deal with. And I'm sure their are other great strategies with it that I'm not thinking of at the moment.

All this from one sentence on the id.

EDIT: So it's been quite awhile since I wrote this review. My understanding of the game has increased, and of course, there are tons of new cards. But I have to say, my opinion is largely unchanged. Now, up to recently, would I rather have played against Blue Sun than NEH? Certainly. But this was not because of the ID itself. Besides the extra influence, NEH is a perfectly reasonable ID. It was NBN's vast arsenal of extremely powerful cards that made playing against it quite challenging. Thankfully there has finally been a nerf to some of these cards (Astro, Breaking News, San San), making it easier, fairer really to play versus NBN.

When considering just the ID though, there are none as powerful as Blue Sun. Granted there are cards that are effective against it. e3 Quetzal is probably the best deck versus Blue Sun. Employee Strike can potentially throw a monkey wrench in your plans if played at the right time. And if they can afford it (and that's a big if) Ankusa can ruin your day. In general though, you won't run into these situations too often. And the almost total immunity Blue Sun has to other popular runner cards more than makes up for this weakness.

Money is king in this game. Blue Sun easily makes money throughout the game. The big thing though is the sudden, click-free intake of 14 or 15 credits that makes it so dangerous. Perhaps both players have 15 credits. The runner runs at an agenda. Corp rezzes Curtain Wall (down to 1 credit). One of the best breakers the runner could have is Cerberus, so we will say that they already have one installed. 7 credits and 2 counters gone (down to 8 credits). They steal the agenda and click for a credit (9 credits). The runner should be safe. The corp has no money, that's the price you pay for rezzing big ICE. That's how the game works. Blue Sun though starts its turn with 15 credits and after Mid, Scorch, Scorch, it is game over. This is just one scenario and there are obviously many factors like Link that come into play, but you get the point.

The other thing is that every card with a rez cost but even some operations like Oversight AI, have a potential to be abused by Blue Sun. In my mind, the game creators need to take into consideration Blue Sun's ability with every single corp card they design. I've read about a Oversight AI, Curtain Wall, Clone Sufferage Movement combo. It probably wasn't thought of before CSM's creation.

Now it does seem most people don't agree with me on this card. You do have to grant though, that it is a powerful ability. Don't IDs with particularly powerful abilities generally have less influence to play with? Iain, Kit, Harmony Medtech (not you GRNDL, you got truly jipped). Just saying.

(Chrome City era)
quailman2101 277
BBG + Adonis is really a 2-turn combo. You need to first pick up BBG, then Adonis. As to OAI + Curtain Wall, it's certainly strong, but if the Runner is able to snipe it (D4V1D and Lady can both do this in a pinch) you destroy a strong piece of ice. — presheaf 19 Jun 2015
2 clicks the first time but one after that. and lady would cost 4 to install and 7 to get up to strength and 2 of its four tokens. worth it? perhaps — quailman2101 19 Jun 2015
"Worth" is a bad word use here. It is "necessity". Question is: "do you have any other viable options at the moment to deny Corp 13c income?" And as for Adonis/BB combo: mind the wording on the ID card. Rez cost reduction actually hurts Blue Sun ability. — quiciuq 19 Jun 2015
I do think you have to decide if it's worth it to snipe the curtain wall with a david or lady. Besides the credit cost you are spending power tokens which you only have a finite amount of. Davids great but using all 3 tokens on one run is a big deal; but if you got a feedback out then i'd say of course do it. Will you get an access after the curtain wall or will you be stopped by something else? As for the adonis/bb I see that you are (thankfully) right. The guy I saw doing it was gaining the 4 credits back with blue sun but I see now that that was incorrect. Thanks — quailman2101 20 Jun 2015
Try playing the ID your self you'll find that its not that overpowered sure you can have alot of credits but actually that dosn't win games theirs a reason NEH is still played. As for Curtain Wall it's not that bad actually if your a crim you usually dont have the influence to take double Corroder so take a Breach it really helps aginst this match up and is a decent enough back up breaker. — Pinkwarrior 21 Jun 2015
Breach would work great, if they put it on a central server. They may not though as putting it on an empty remote server lessens the motivation to snipe it. But yeah, its still the perfect weapon vs curtain wall. — quailman2101 22 Jun 2015
In my mind, the only deck good against blue sun is a deck full of credits and cutlery. But I just play casually so I guess I don't know anything for sure — quailman2101 22 Jun 2015
@quailman If they put it on a remote you just lockdown their R&D or HQ preferabley both, other tools in crim for blue sun include inside job and emergancy shutdown. — Pinkwarrior 22 Jun 2015
Blue Sun's main weakness is a one that the runner benefits from but seldom notices: You're almost gauranteed to know what ice you'll be facing before you hit it, because it will be pre-rezzed (or recently picked up and put back down). This allows you to build your breaker suite to match the situation. — KitsuAeryn 24 Jun 2015
That can also work against you. You may be expecting a Curtain Wall that the corp has repeatedly put down, only to eat an Archer. — quailman2101 23 Jul 2016

I had someone combo Blue Sun with oversight AI and a Sandburg in a well protected server. He rezzed crazy ice that became even stronger because of Sandburg's ability to make ice stronger based on your credit pool. He was impossible to run against, so I just conceded. Most boring game ever.