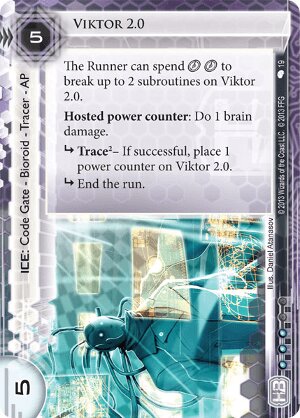 subroutine Trace[2]. If successful, place 1 power counter on this ice.

Illustrated by Daniel Atanasov
Decklists with this card

Compared to Viktor 1.0, the extra 3 to rez Viktor 2.0 gets you two extra strength, for the first subroutine instead of the Do 1 brain damage it now features a trace dependent to give the runner a brain damage in the form of a power counter that can be redeemed by the corp at nearly anytime, additionally the runner has less flexible options for breaking since it must always use to break both 's instead of a single for each unlike most Bioroid ice including Viktor 1.0

Viktor 2.0 is often included in decks with Viktor 1.0 to maximize brain damage inducing situations for the runner

Marcus Batty &/or Tyr's Hand: Sticking a surprised runner with either of the s on Viktor 2.0 could potentially be a game ending event, or at very least put some momentum into the corps favor.

Strength of 5 makes it very expensive to use many icebreakers to break either of it's . and unlike Viktor 1.0 it's strength of 5 puts it out of range for Yog.0. Got a Parasite? Probably have a bit of time

Surprising the runner with insufficient s may result the runner losing some IQ due to brain damage possibly swinging momentum into the corps favor.

Power token can be saved and used at just the right moment, giving corp lots of flexibility and possibly cause the runner to question himself at every turn.

Can end the run

With it's higher cost, such cards become juicy targets for operations such as: Emergency Shutdown or Forged Activation Orders etc.

Even though it is taxing, runner has lots of options to navigate through this card.

Do 1 brain damage is dependent on successful trace taking away some control from the corp.

Brain Damage decks are always looking for ways to cause brain damage, Viktor 2.0 provides such opportunities. Glacial decks should give Viktor 2.0 a look because of it's tax value to the runner at reasonable cost.

(Data and Destiny era)
chris_walker 685
Another *huge* con: A base trace strength of 2 is not much. If the 1.0 version fires, you deal a brain damage, if the 2.0 version fires, you tax 2 creds, which is far less dangerous to the runner than a brain damage. And this leads me to the combo cards you didn't mention: Rutherford Grid, NBN: Making News and Improved Tracers. (And Primary Transmission Dish, but that card isnn't really worth being mentioned imho.) It's important to note that the trace is only a threat if you _make_ it a threat. The least you could do to achieve this is having more money. — Krams 27 Nov 2015
Another overlooked combo is Helium-3 Deposit. If played along other power counter ICE like Data Raven or Mamba this makes for an interesting power counter archetype deck. I've tried it. And lost 90% of the games with it. But it's an interesting concept you don't see around often and it can be fun to tinker aroung with. And those power counters piling up can create a flatline threat really fast. — Krams 27 Nov 2015
I think you can stop leaving reminders to upvote at the end of all your reviews...this isn't a popularity contest. The purpose of likes is to direct the community to helpful reviews, not to feed your ego. — Bigguyforyou518 27 Nov 2015
I didn't care about the upvotes until I went to write another review and found that I didn't have a profile score high enough to post any more reviews. It's a very frustrating situation I don't want to be in again, thank you for caring. — chris_walker 28 Nov 2015
Thanks for your efforts Chris, they are much appreciated. — OuterCrow 7 Mar 2016