The first credited icebreaker was nothing more than a unique script to bypass the security calls on a Gibson 3 Data Sentry. Garrote has over 20,000 times the data as that first breaker, but the idea remains the same: cut off the power source from the network, and then smash on through.
Criminal • Zefanya Langkan Maega • True Colors 65
All sets:
Links: Decklists | ANCUR 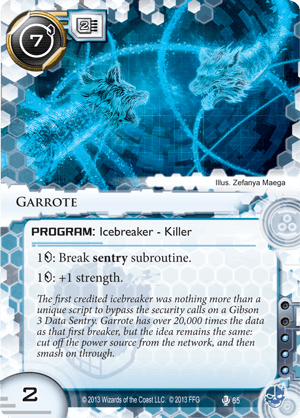 Garrote is the most efficient general-purpose Killer in the game. It's similar to Corroder, but vastly more expensive. However, you get what you pay for - reliable protection from any sentries. Sentries will trash your rig and fry your brain, so it's often cheaper than not having Garrote, or having a lesser killer like Ninja or Femme Fatale. In my meta this card sees play in decks that take a lot of setup then efficiently lay waste to the corporation's servers.

Garrote rounds off the basic 2 strength no-frills breakers in a rather disappointing manner. In terms of efficiency Garrote is on par with it’s brethren Corroder and Gordian Blade. But that efficiency is some what negated when first installed. At 7 credits you might not able use it once installed or even afford to install it when you need to. Of course they are ways of lowering this cost. Initially, though, Pipeline may be a better choice as a Killer.

The main issue with Garrote, and what makes it overpriced, is the cost in memory. For the 2 memory you would expect some kind of additional ability. Gordian Blade keeps it’s strength for the remainder of the run for a credit at a time, potentially saving money, for an install cost of 4 credits and 1 memory, comparably underpriced next to Garrote. On a more direct Killer comparison Pipeline has the same strength ability but for 2 credits a go, making it slightly fairer in pricing at 3 credits and 1 memory. An ability like this on Garrote may warrant the extra memory cost. I have a suspicion that during development there may have been an ability that was found to be overpowered, something in line with the flavour text, such as ‘de-rez the encountered ice if all subroutines are broken and Garrote’s strength exceeds the ice’s strength by X, X being the strength of the ice.’

After saying all of the above, by no means is Garrote a bad Killer, within faction it pretty much comes out on top and supplemented by Faerie you can face-check potential sentries safely whilst building the money to install, but there will be other killers that will better suit your build.

(Chrome City era)
Brainteki 22
To me, Garrote is the best illustration of the design philosophy behind Sentries and Killers. Sentries are supposed to be inherently dangerous, and Killers are supposed to be inefficient compared to other breakers to reinforce this design. Garrote, with more raw efficiency than any other Killer, is still only two base strength and costs a whopping 7 creds and 2 memory to install. I don't feel Garrote needs an additional power; rather it clearly displays that Sentries are supposed to be the scariest pieces of ICE and that no program can cut through them without some kind of impact on the runner's rig. — FarCryFromHuman 21 Jun 2015
Good luck breaking Architect for 6 and Cortex lock for 7 credits with Garrote. — konradh 21 Jun 2015
With Pipeline surely? :P — Cliquil 22 Jun 2015
I think it's important to note that Sentrys also have the lowest Str for Highest cost ratio it costs alot for a high str sentry in most cases so it makes sense that sentry breakers are worse than their codegate / barrier counterparts. — Pinkwarrior 22 Jun 2015