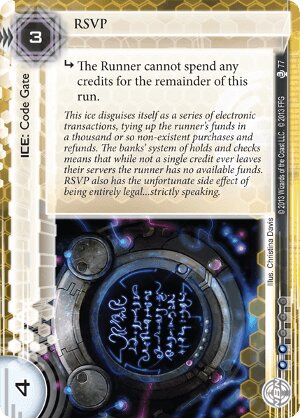 subroutine The Runner cannot spend any credits for the remainder of this run.

This ice disguises itself as a series of electronic transactions, tying up the runner's funds in a thousand or so non-existent purchases and refunds. The banks' system of holds and checks means that while not a single credit ever leaves their servers the runner has no available funds. RSVP also has the unfortunate side effect of being entirely legal…strictly speaking.
Illustrated by Christina Davis
Decklists with this card

A solid code gate with a deceptively useful subroutine. At a mere 3 rez cost to its 4 strength, RSVP is efficient and taxing. 4 is a magic strength total in the current meta; just out of Yog.0 range but beneath D4v1d, making it hard for certain decks to deal with. The costs for some common icebreakers:

The cheap cost for Cyber-Cypher (and Atman at 4) unfortunately makes RSVP weak against the popular Prepaid Kate archetype which is one of the strongest runner decks at the moment. Many Criminal and Anarch decks splash ZU.13 Key Master however, which RSVP is incredibly taxing against. If Net-Ready Eyes leads to a resurgence of Yog in the meta then the stock of RSVP will go down significantly.

While RSVP doesn't technically end the run, in a surprising number of situations it makes the runner's success unimportant. In particular, it's a great, cheap piece of ICE for protecting assets in both remote and central servers since its subroutine prevents paying trash costs. But there's a long list of defensive upgrades and agendas that require the runner to spend money, notably: NAPD Contract, Predictive Algorithm, Red Herrings, Ash 2X3ZB9CY, Caprice Nisei, Utopia Fragment, and Fetal AI. It also combos with the in-faction Pop-up Window to hard end the run, though ICE defense strategies that rely on ordering are notoriously brittle (e.g. Parasite ruins this plan). While RSVP is good in faction, it synergises really well in a couple of other decks, too:

An underrated piece of ICE that is great in certain builds but can feasibly be a one- or two-of in most NBN decks as well.

(Chrome City era)
phette23 2261
I completely agree that this card is under rated. I think it's place is a single ICE protecting a remote with an asset. An in faction Daily Business show behind this becomes incredibly taxing. And after training the runner that your assets go in that server, you can easily hid a 3/2 agenda in there and score it out (ain't no way they are running through that for an unseen "asset"). — UminWolf 4 Jun 2015
As predicted, the existence of Net-Ready Eyes has indeed caused Yog to become popular again. But even without that, Atman at 4 is immensely popular, making this only 1 credit to break. — tiedyedvortex 24 Jun 2015
One Word. Tollbooth. — Handsome Jack 10 Mar 2016