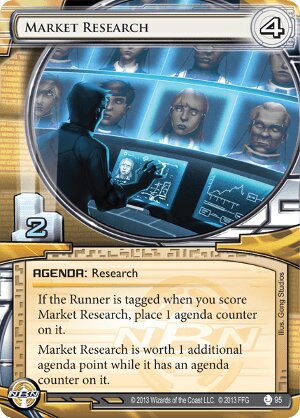 If the Runner is tagged when you score Market Research, place 1 agenda counter on it.

Market Research is worth 1 additional agenda point while it has an agenda counter on it.

Compare this to Quantum Predictive Model and Global Food Initiative.

To QPM - Both are part of the "two advancements above point value" family. However, the difference between Three and Four is a much more significant gulf than the comparative value of their points when scored. The tag is worth 1 extra agenda point when scored, while QPM doubles as a counter to a steal, meaning that it is both a swing of net 2 agenda points and also negates an entire access. The extra point of "swing" difference is not as important other than in match point or create-match-point scenarios, but the ambush value exceeds the effort of having to Install/Advance Market Research or otherwise spend a FA tool after an install, compared to the ability to Install never-advance an QPM. Ultimately, "Tag Storm" decks nod their head to QPM over Market Research.

To GFI - Both work to expand your point value; however GFI does an amazing job of also being a method to reduce your overall Agenda density. The scoring windows that allow a four advance but not a five advance are vanishingly small, and tag-application is much harder to stick into the corp's turn if you are threatening a Scorched Earth if the runner has not already started yawning off with Paparazzi. Imagine a line of IAA Market Research, hold the fort, SEA Source Advance Advance for three points. Trading a SEA Source (real card, real money) for essentially playing GFI, but you also got an extra tag on the runner and save a single influence.

Ultimately, this is a card that doesn't want to be yellow. NBN doesn't yet need to have a 4/3 in order to clean up games against tag-me runners.