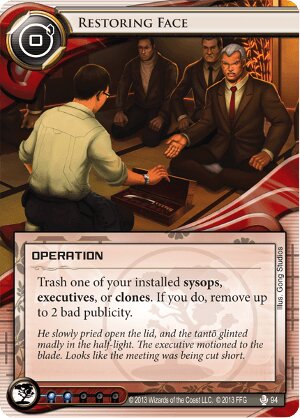 Trash one of your installed sysops, executives, or clones. If you do, remove up to 2 bad publicity.

He slowly pried open the lid, and the tantō glinted madly in the half-light. The executive motioned to the blade. Looks like the meeting was being cut short.
Illustrated by Gong Studios
Decklists with this card

Take one for the Team

When the public is out for blood, throwing them some meat can go a long way towards taking the pressure off. Sometimes a company can do more to serve the greater good by asking on of it's team members to fall on his or her own sword (figuratively, though the artwork on this card suggests otherwise) rather than sticking around, Restoring Face brings this practice to Android Netrunner

Clean out your desk: There are currently 22 sysops, clones or executives that Restoring Face can interact with to remove up to 2 bad publicity. Elizabeth Mills probably represents the strongest synergy basically bringing the total bad publicity removed up to 3, recur her with Archived Memories, Jackson Howard etc for even more.

Clear up bad publicity from ice: Checkpoint, Fenris, Grim, Muckraker, Shinobi, Swarm, all are powerful ice which unfortunately are semi-self defeating in that they confer bad-publicity which the runner in turn can use to better navigate ice for the remainder of the game unless cleared off in some way.

Clear up bad publicity from agendas: Geothermal Fracking, Hostile Takeover, Posted Bounty, Profiteering, Project Ares, Vulcan Coverup all have the negative side effect of inducing bad publicity, Restoring Face could be decent compliment to any of these.

Bad publicity from assets: Reality Threedee is an example of an asset that unfortunately confers a bad publicity when rezzed.

Easier to score: Stacking up bad publicity makes NAPD Contract harder to score clearing them out of the way with Restoring Face might be advisable before putting NAPD Contract down to score

Completely flush resources : With the prevalence of Data Leak Reversal for example Restoring Face can be used to clear off bad publicity ahead of using The All-Seeing I to completly wipe the board of all the runners resources, which unless the runner had 3+ bad publicity on the corp this would be unpreventable.

Efficient Double Duty: Clearing 2 bad publicity in addition to trashing an upgrade or asset that is no longer pulling it's weight helps the corp by providing a bonus to an activity that was going to happen anyway.

Economical: At 0, a sysop, executive or clone merely need to be installed, not even rezzed in order to combo with Restoring Face.

Costly: Trashing an installed & rezzed sysop, executive or clone may represent significant lost of sunk cost and possibly drag on momentum depending on ability that will no longer be conferred by the trashed card.

Restoring Face's thematic flavor alone is noteworthy, any deck that focuses on removing bad publicity would do well to consider it alongside (or in combo with) Witness Tampering, Elizabeth Mills & Exposé among other options available in the meta. So, hey the company was needing to downsize anyway right?

(Data and Destiny era)
chris_walker 685
Don't forget that Elizabeth Mills, Expose, Witness Tampering and a few other options exist. Plus unless the runner is planning on giving you Bad Pub anyway, Runner Mischief isn't going to randomly show up in a runner deck. — Goldstep 23 Dec 2015
Thanks Goldstep, those cards now get their moment of recognition! — chris_walker 6 Jan 2016
I initially thought you would be wrong about being able to use Restoring Face on an unrezzed card, but according to the FAQ, you can! [Insert "The More You Know" Here] — Quarg 7 Jan 2016
3

Oh look. This looks like that it is the enthusiastic kid we've seen much later on an art for Recruiting Trip.

Your script can pull off the Kobayashi in .12 seconds, but can it staunch profuse bleeding from a stomach cut open?

Some career you've had!