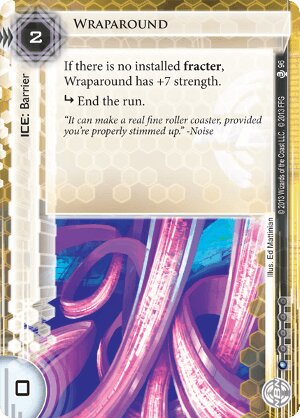 While there are no installed fracter programs, this ice gets +7 strength.

"It can make a real fine roller coaster, provided you're properly stimmed up." -Noise
Illustrated by Ed Mattinian
Decklists with this card

This piece of ICE isn't meant to keep runners out as its strength withers at the sight of a mighty fracter. Instead, Wraparound is meant to save NBN one credit and get the same benefits as its neutral counterpart, Wall of Static. Battering Ram takes 2 to get past both. Morning Star is going to get past both for 1 too. So why use the Static Wall at all? Well if you know any Criminal players...

But, wait there's more! Wraparound is one of the first AI hate cards that beginners are introduced to in the Revised Core Set, along with Swordsman, costing Darwin 2 at 7 counters (Datasucker-less) and Crypsis 8. Unlike Swordsman though, this ICE's End the run subroutine still functions fine without any AI breakers on the board, making runners dig for that fracter ASAP. Meanwhile Swordsman becomes a minor nuisance to runners and loses its "ambush" the moment it's rezzed if there are no AI breakers available for it to slice.

In conclusion, Wraparound should be a x3 in any NBN deck and at 1 influence, deserves splashing in any other corp faction (with maybe the exception of Weyland who's already got plenty in barrier options). The 1 in rez savings may not seem like a lot in hindsight but it adds up, especially against Anarch opponents.

(Crimson Dust era)
BlackCherries 351
You say that the 1[credit] saved in rez cost that Wraparound has over Wall of Static adds up, especially against [Anarch] abilities found on Reina Roja and Xanadu. Surely the most it adds up to is 3[credit], even against those [Anarch] tricks? The only tricks that would bring the cumulative Wraparound over Wall of Static rez cost savings up would be ice destruction and derez tricks, which in Revised Core is Criminal. — totsuzenheni 17 Nov 2017
It was meant in a very general sense. Given NBN: Making News now might hold the title for poorest Corp in RCS with Jinteki: PE getting Celebrity Gift, every credit matters (is what I was trying to imply)! — BlackCherries 18 Nov 2017
3

Wraparound is a type of soft AI hate and Engolo hate. Runner using AI breaker (most popular are Eater and Aumakua) will have to put a lot of creds to pass this ice (6 creds for Eater). Runner using Engolo as their main breaker will have to pay a lot also (7 creds). At 2 creds to rez, this is a good deal. Also, if the runner does not have a breaker, it is still a hard End The Run (ETR).

However, as soon as the runner get any fracter (Gauss, Paperclip, Tycoon), the strenght of this barrier become zero. Making it a small speed bump at best.

In this case, why use such an ice? Which archetype is good with this ice? The answers : rig shooter and fast decks. Rig shooter deck will use multiple combination of cards to trash program and other card on the board of the runner. By trashing the fracter, Wraparound become again a powerful ice that cost only 2 creds to rez. Fast deck aim to put their plan in motion faster than the runner can setup. Runner using speedier deck often use an AI breaker or Engolo. Wraparound will be very good against those.

Note that like all ices (except Guard), Wraparound can be bypassed or broken easily by Boomerang. But at 2 creds and 1 influence, Wraparound will let you have a good ice for the early game (or short game), and it will not affect your credit balance very much.

Wraparound should not be used in every deck, but it has good use in certain archetype. It can be also just a somewhat cheap barrier that is good only in the early game. Certain gameplan are forgiving that way.

A cheap and effective foil to AI breakers. This card is trivial for a Corroder or other fracters to break, but against an Eater or Overmind this card is very taxing. At one influence this can easily splash in any deck that you can't fit a Swordsman into if you are afraid of AI or Parasite. Against a standard program setup, Wall of Static or Eli 1.0 are better barriers.

Also, if you are using Paper Wall for some reason, just use this instead. It costs 2 more but doesn't self-destruct.

(Order and Chaos era)
Steamwood 303
You'd use Paper Wall in the same situations you'd use Quandry: to force the Runner to dig for a breaker they don't need. If you're running Paper Wall, it should be your only Barrier. Likewise with Quandry and Code gates. But to your point, yes, Wraparound will achieve the same thing as Paper Wall while being much more expensive to punch through if their barrier-buster isn't a fractor. — KitsuAeryn 23 Mar 2015