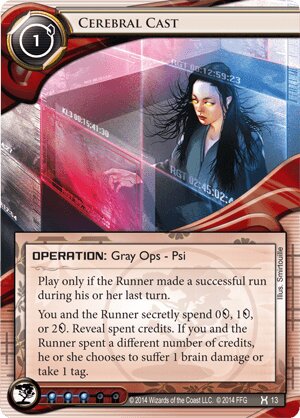 Play only if the Runner made a successful run during his or her last turn.

Illustrated by Smirtouille
Decklists with this card

Listen up, guys (and gals, if any gals are reading this I'm deeply flattered) - when I wrote this review, I was in kinda dark place. But then I scored me some rent-a-cops as Jinteki and it suddenly became A LOT funnier.

Read the rest of the review if you want. If you don't, just splice this card and watch the sparks fly.

It's a Jinteki card - but not the one Jinteki plays. No, no - tag vs. 1 brain damage is no choice at all for a Runner rising against this japanese biotech megacorporation, as most of the times the tag isn't just as dangerous as reducing your maximum hand size by one. You could try and play it to force the runner to lose some creds, but honestly - you have about 66% chance for it to work.

No. Where Cerebral Cast really shines is when being outsourced to a deck profiting from tagging the runner. Upon realizing that you could, anytime, explode his sorry self to the orbit, rob him blind or just outright murder his extended family and friends, he is much more likely to take this one brain damage instead of exposing himself to the hardships of being tracked. And when he does, it becomes so much easier to murder him later - after all, he's at four cards tops now!

Want more wackiness? Splash a single Scorched Earth into your average Jinteki passive-agressive brain/net damage compound, then watch him choose a tag with that smile of pity on his face... And make him never smile like this again! Now that's a clever ploy - to pretend your deck actually does something else than just simply tagbag, and then do exactly this. This might be the ultimate bluff ever done in Jinteki.

It is three influence a piece. This, by any stretch of the imagnation, is not cheap for a card that might help - or might not help at all, or even worsen things by two credits and still do nothing.

For a card that doesn't even know where does it belong.

(Data and Destiny era)
H0tl1ne 387
I would have to disagree. For starters, outside of Jinteki people will be quite comfortable to just take a brain damage, leading tag punishment cards to be dead in the water without some other way of handing out tags. Besides - it's 3 influence. SEA Source is more reliable and less costly. But it's inside of Jinteki where this card is just fabulous - I've run 2 before without complaints, and some will run all 3. For starters, you can pick up some kills with Scorched Earth + Neural EMP, as you suggested. A lot of decks run a singleton Scorch to punish tag-floating after Snares anyway. But even if you can't kill, that tag allows you deal with two of the worst resources for Jinteki: Film Critic and Kati Jones. And unlike outside of faction, where kills come from doing exactly 8 damage in one turn, where the difference between 5 and 4 is negligible, Jinteki manages to squeeze out kills from any number of cards in hand, which is where that brain damage matters. — RubbishyUsername 5 Jan 2016
Besides: click on the "decklists" button. I see a lot more Jinteki there than any other faction. — RubbishyUsername 5 Jan 2016
Seems like I failed a bit at doing my research. Didn't mean to cause no confusion — H0tl1ne 5 Jan 2016
Aaah, my comment was cut short by a rubbish phone. I wanted to say thanks for pointing that out. Also, I played Cerebral Cast in a tagbag Titan Transnational, along with two SEA. It kinda works there, though sometimes not as good. I'd say it's just risky — H0tl1ne 5 Jan 2016
It could in theory work out of a Xanatos CI deck...but with the hit to Eli 1.0 the influence space for the Mushins and Media Blitz are just too tight. — GrantZilla1979 6 Jan 2016
This card is a lot of fun. It does require some tag punishment to be imported, but that only makes Snare more powerful. I have landed a 3rd cast only for the runner to finally give in and take the tag, only to be scorched immediately. The card is fun, but I haven't seen it push a deck into Tier 1 performance, if Jinteki had more tag punishment or brain damage, then it would probably see more play. — bubbathegoat 6 Jan 2016
2

Recently saw the vid online of a nisei jinteki deck that splashed Defective Brainchips and EOI and multiple copies of Cerebral Cast. Have to say, it is a truly nasty decision the runner must make. take the tag and lose a 3pt agenda via EOI, or 2 BD. Such a great headgames card.

I think many people who look at Cerebral Cast will look at the effect, think "tagging? this isn't Jinteki", and decide that this is a card to be imported. I think that's misevaluating the card somewhat, though.

Cerebral Cast is a card that gives your opponent a choice. Like all such cards, they are only good if you make sure that the worse choice is good for you. So in order to be able to make good use of Cerebral Cast, you need a deck which can make use of either option.

First off, the brain damage. There are two basic types of deck that care about brain damage: flatline decks which want the Runner to have a smaller hand size so that they can withstand less damage at once; and grinder decks that rely on the fact that the smaller the runner's hand size, the more cards they will have to draw if they want a safe hand size buffer for running. The majority of the cards in either category are Jinteki cards; even when building a brain damage deck out of Haas-Bioroid (which has most of the brain damage cards), it will still often rely on Jinteki cards like Snare! or Neural EMP to finish off the runner; and grinding cards like Harvester also typically come in red. So if you want to build a deck to profit from brain damage, you'll probably be playing a lot of red cards. Cerebral Cast is unusable against an opponent who doesn't care about brain damage, so in order to make it work, you'll need to include both Cerebral Cast (3 Jinteki influence), and several brain damage punishment cards (also typically Jinteki). In other words, this card isn't going to be all that effective out of faction; you're paying influence for it, and plenty more influence for the support cards.

What about the tag? Tags do do something on their own; they allow you to trash resources, which is something that even a Jinteki deck with no tag punishment can make use of. If you Cerebral Cast click 1, and the runner can't stand having two arbitrary resources trashed, they have to take the brain damage. So this is already a card that can help out a typical Jinteki deck, situationally; although if you want to trash resources using a psi game, you would probably be better off running Voter Intimidation which doesn't give the Runner a choice.

However, the main reason tag punishment cards aren't normally played outside tagging decks is that it's hard to land a tag mid-turn. The best mid-turn tagging card is probably SEA Source, which not only requires an economic advantage over the runner, it is very expensive when the Runner is rich (and thus will probably lose you the game in this case unless you use it to win on the spot or else combo into Closed Accounts). It takes support to be able to pull that off; a strong economy, at least. So tag punishment cards aren't widely played outside decks that can either land a SEA Source, or else land a Hard-Hitting News in such a way that the Runner won't simply clear the tags.

Cerebral Cast is a notable card because it changes this theory. To fire a Cerebral Cast, all you have to do is win a psi game, and then the Runner has to take brain damage or else let you tag them. And if you have a sufficiently powerful tag punishment card in hand, the Runner has to take the brain damage. Cards like Closed Accounts and The All-Seeing I are huge setbacks to typical runners, and only 1 influence each, meaning that they're easy to import into your decks if you want to.

So the way to think about Cerebral Cast is that it says "if your deck is running tag punishment, do a psi game for 1 brain damage". (In testing, the majority of runners took the brain damage, and were correct to do so; the few that took the tag normally ended up losing as a consequence.) "Psi game for 1 brain damage" is a hugely strong effect in most Jinteki decks (often winning games on its own); Cerebral Cast gives you the opportunity to get that effect, but only if you're willing to dilute your deck by spending some influence on tag punishment cards. So it's effectively a build-around card that suggests trying out a new deck style: Jinteki, plus a tag punishment subtheme.

Of course, once you start going down the tag punishment route, then that starts to change the way you evaluate your cards; an initially minor change to a deck (mixing in some tag punishment so that you can run Cerebral Cast and thus deal brain damage without needing a trace or a Cerebral Overwriter shell game) can start leading to temptation. "If I'm running all this tag punishment anyway", you may think, "what about adding some tagging cards to combo with it?". I'm someone who likes both competitive decks and jank decks, so of course, once I thought of this, I had to try it out. And my verdict is: surprisingly, it actually kind-of works. Cerebral Cast is what makes the tag punishment cards playable in Jinteki, and the tag punishment cards then make the tagging cards playable. Because you're playing Jinteki and not NBN, it's hard to get the economy needed to make a traditional tagging suite work; but it doesn't seem to be impossible, and you have the huge advantage that your opponents are unlikely to be playing around traces the way they would if you had a yellow identity.

It's also worth noting that Weyland tag punishment, although very expensive in influence, naturally works very well in a Jinteki deck (especially one that does brain damage!) Cards like High-Profile Target are incredibly scary when you're playing against a deck that reduces your maximum hand size and is constantly threatening a flatline combo (especially because Cerebral Cast triggers Fumiko Yamamori to deal an extra point of meat damage).

Conclusions: this card is a really strong card in-faction if you build your deck around it, but at the cost of having to use potentially suboptimal support cards. As a consequence, it basically creates its own deck style, "the Cerebral Cast deck". I don't think it's usable out-of-faction. It is possible to go further, making use of Cerebral Cast plus its support to produce a full-on Jinteki tag deck; this probably won't win tournaments (although the surprise factor will definitely help), but can hold its own in a casual environment and will stand a good chance against most castual decks.

Now I want to play it xD