subroutine The Runner draws 3 cards and then discards down to his or her maximum hand size.

subroutine The Runner draws 3 cards and then discards down to his or her maximum hand size. 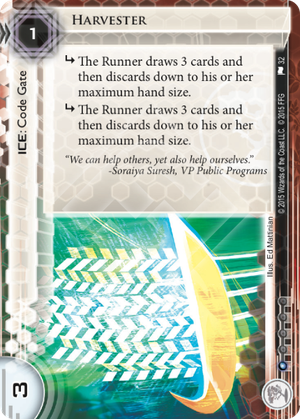 Here's the thing about Jinteki. Some of the time they're trying to kill you. And sometimes they just want you to suffer.

Sure, you have a few cards with the potential for a kill: Cortex Lock, Ronin, Snare!. But you also have a lot of cards that, while they hurt the runner, are unlikely to actually kill them. Psychic Field, Shock!, Komainu, Shi.Kyū, House of Knives, Fetal AI, Hokusai Grid.

The "Thousand Cuts" archetype wants the runner to bleed. It forces the runner to realize that they're going to lose somewhere around a third of the cards in their deck over the course of a game. Any tightly-wound strategy player with combo pieces that have to be held in hand, or anything that used cards as fuel (cough Faust cough Aesop cough Apex cough MaxX) is going to find themselves with very little left in their stack to work with.

This is where Harvester comes in. Forcing the runner to draw up to and past their maximum hand size means you are going to have a tough time killing them. But, if the runner was already at max hand size when they hit it, that means that SIX CARDS are going to get thrown in the garbage. SIX. That's 13% of a normal size runner deck.

Of course, that does mean that the runner can churn through their deck faster to find exactly what they need. And this is where your other net damage becomes really useful. See, against a thousand-cuts deck, a wise runner will hold their less useful cards in hand as a buffer so that suprise Snare! hurts less. But if you've just been Harvested, that isn't an option.

But this only matters if the runner is at max hand size when they hit Harvester. If the runner can absorb one of the subroutines without discarding, it doesn't look so great. As a result, Harvester does best in a deck that does brain damage or otherwise limits hand size. Pālanā Agroplex will also help you keep their hands full.

Conversely, if you're in a meta with a lot of Brain Chip, it's probably going to help the runner more than it hurts them. Definitely don't run Harvester and Mental Health Clinic in the same deck.

(Business First era)
tiedyedvortex 4560
as addition to above, this card is great replacement for Eli in RP. Four to brake with zu, parasite resistant and 0 inf. — Pegaz 12 Mar 2016
I agree. I'm not 100% sold on this card but I think it might be a sleeper people will discover. Faust be — Benjen 12 Mar 2016
apologies for my last comment. Something went weird. I was trying to say Faust breaks for 3 cards or they lose a bunch. Hitting this after a Wyldside draw can be huge. I'm definitely going to try it out and see if it works. — Benjen 12 Mar 2016
I see this as a nice tool in brain damage decks, or with Cybernetics Division + Self-Destruct Chips. When I play those decks, the runner often pads their hand (a la Diesel/QT) before running to avoid flatline via Snare/Junebug et al. Harvester puts them back down to that 2-card hand WHERE THEY BELONG before they access 3 cards from R&D where snares are waiting... — PureFlight 13 Mar 2016
OH WAIT Chairman Hiro totally benefits from this. Runner approaches, rez Harvester+Hiro, discard ~8+ cards. Gyri Labyrinth too. Or, if you don't like the runner sculpting the ideal hand, preface with a Lockdown. — PureFlight 13 Mar 2016
The problem with limiting the runner's card draw with a Lockdown or Genetics Pavilion is that it nearly blanks this ICE, unless they're well over handsize already (and even then, the second sub becomes blank). This is for a Thousand Cuts deck, burning through the runner's deck rather than letting them use it all to soak damage. — LeonardQuirm 14 Mar 2016
Harvest works really well with Chronos Protocol on two fronts. First, if you suspect your opponent is holding on to an I've Had Worse and you have a source of "During Run" net damage (House of Knives), you can snipe the I've Had Worse before they hit Harvester, force them above hand size, then Harvester fires and chews potentially 5 cards (7 with Chairman Hiro). That's a lot for a 1 credit rez and 1 agenda counter. The second function is that they will be sculpting their hand with Harvester, so you can poke them with House of Knives afterwards, and have a look both at what their plan is, and rip the best card from their hand. — FatalSource 17 Mar 2016
2

I've used Harvester as a one-of for awhile in my Jinteki: Potential Unleashed deck, where it seems to fit the theme perfectly, but even there I think it just isn't very good. Early game, they'll gladly toss a few cards to accelerate their setup, and late game, they often won't care either. It doesn't do anything at all if you've already milled them. If they actually want to break it, it usually costs 2 or 3, which would be good for a 1-rez if it weren't so situational. Harvester just gives the runner too much control. Not bad in front of a Komainu though. I think this would've been more interesting if it was actually expensive to break, was a trap ICE rather than code gate, or if the discards were done as net damages.