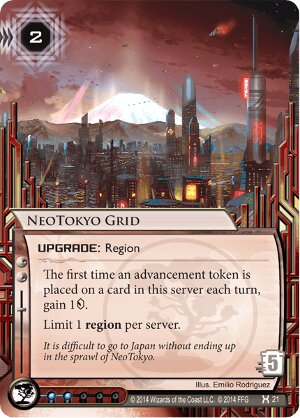 The first time each turn an advancement counter is placed on a card in the root of this server, gain 1credit.

It is difficult to go to Japan without ending up in the sprawl of NeoTokyo.
Illustrated by Emilio Rodriguez
Decklists with this card

A rather weak grid. The issue with it is that is states that you only get the 1 for rezzing something IN the server. This means it only works with assets, upgrades and agendas. It doesn't do anything with weyland's ice that can be advanced. The second limitation is that it only fires once per turn. This is fair, but it means we are looking at a variation on a PAD Campaign. And its comparison isn't all that rosy: It is less reliable than Pad Campaign when it comes to money generation. You would need something to advance and do it every turn. It is however harder to trash.

It is worse than a PAD Campaign, which on its own just a fine economy card. So why bother, right?

Well, Tennin Institute: The Secrets Within was also in this expansion. Note that this card works with Tennin's unique ability. If no successful run was made on the runner's turn, then you will get to put one advancement on a card in the neotokyo grid server. In the worst case scenario, you will place it on the grid itself. Even so, the runner will get through some of the time, so that is worse than a PAD Campaign. The only benefit is that you might have some advancement tokens floating in your server. If they are not on an agenda, you could potentially use this with a Trick of Light to fast advance an agenda.

For the true jankmeisters amongst us, you could earn back the money spent on a Matrix Analyzer's encounter effect. Not spectacular still, but it's at least something to redeem this card.

All in all, it is for tennin specifically a weird upgrade version of a pad campaign that is less efficient.

(Free Mars era)
Severijn 534
Anson Rose is probably the most reliable way to trigger the effect. Not great, but if you have Anson anyway it's a way to get an extra credit per turn. — Silv 2 Aug 2017
Good catch Silv — quailman2101 2 Aug 2017
Indeed! While I do not think you want an asset in your neotokyo grid server ideally, you could theoretically play an ice suite of 3x ice wall, 2x hortum, 2x colossus and 2x anson rose. You'll have spent 13 influence but it is possible. Maybe I'll build a janky deck for this. All for that sweet Anson Rose money and trick of light shenanigans. — Severijn 3 Aug 2017