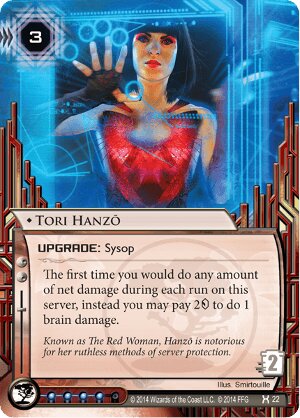 interrupt → The first time you would do 1 or more net damage during each run against this server, instead you may pay 2credit to do 1 core damage.

Known as the Red Woman, Hanzō is notorious for her ruthless methods of server protection.
Illustrated by Smirtouille
Decklists with this card

Land all three and flip the Jinteki Biotech: Life Imagined brewery for larfs.

Any runner worth their stuff is gonna have some damage mitigation that you'll have to play around, such as I've Had Worse. But when their hand size is down to two, floating one of those around is gonna be mighty limiting. Deus X and Net Shield can't protect them from damage of the brain, much less the ensuing hurting of the butt.

Force them to trip the mine over tiny agendas such as House of Knives and Genetic Resequencing - then giggle and fart.

Definitely not a tourney strat, but I'll be damned if it's not one for good times over the kitchen table or the hobby shop backroom. Just don't forget to splash in some cheap end the run ice (Or go full tax/click compression). What are you? A Jinteki nooblord?

(The Underway era)
ASleepyGuy 3
As per [this ANCUR page](http://ancur.wikia.com/wiki/Tori_Hanzō), if a runner can prevent net damage, Tori doesn't get a chance to turn that net damage into brain damage. Sad face. — michaeln 28 Jul 2015
Inversely, if you Rez Tori->HOK, they have no chance to tutor or clone chip a Deus Ex to avoid it, so there's that. — seurimas 28 Jul 2015
Probably the most useful way to use this card is as a one-of in combination with Aginfusion's ability (or other means of forcing the run to end) and Kakugo to inflict 2 or 3 brain damage in a deck that uses the Data Loop + Obokata Protocol combo to close the game against a rich runner. With a max hand size of 3, the runner needs to draw three times (without a burst draw card) to steal behind Data Loop, leaving them vulnerable to Aginfusion's ability. — CelestialSpark 19 Oct 2018