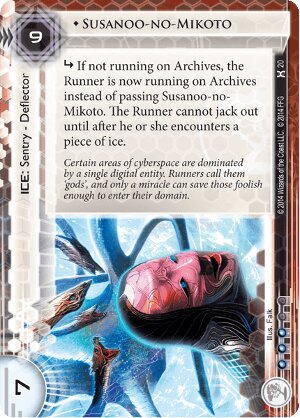 Certain areas of cyberspace are dominated by a single digital entity. Runners call them 'gods', and only a miracle can save those foolish enough to enter their domain.
Illustrated by Falk
Decklists with this card

Susanoo-No-Mikoto is a hard sell for the corp. 9 to rez a piece of ice with only one subroutine? Why bother when Tollbooth, which costs 1 less, has more utility with a very taxing non-subroutine effect?

The answer lies in what SNM is supposed to do. And I'm convinced this is there to do one thing—to flatline the runner. Jinteki may have more ambush assets than you can shake a stick at, but it's usually impossible to steer a runner into them. Most runners will just avoid an archives with several face-down cards, especially if they see a deck with little ice and laden with traps. SNM, however, can force them into the spider's web, but has to be used carefully to get the intended effect.

The key to SNM is patience, along with its wording—"...until after he or she encounters a piece of ice." This means, if you have no rezzed ice on your archives, they must access archives! Or, you can drop some ice with net damage (e.g. Komainu, Cortex Lock, or even Neural Katana) with a nasty Whirlpool to ensnare runners without AI breakers. And, for the most part, SNM becomes more dangerous over time, as your archives fills up with Shock! or other ambush cards usable from archives. Lastly, putting an unrezzed Hokusai Grid on archives, or a House of Knives with counters available, provide other options for the final coup de grâce.

Rezzed at the wrong time, though, it may do nothing more than hurt your wallet. It's most effective with the element of surprise, before Femme Fatale can latch on and make it nothing more than a joke. Speaking of downsides, expose can throw a wrench in your plans, unless you have Zaibatsu Loyalty handy. And, there are several cards than can make SNM a liability, namely Forged Activation Orders. Finally, a usable Switchblade laughs in its face, Snitch can make it cry, and Faerie is found in more than a few decks and can easily limit available rez windows where it could otherwise do heavy damage. Oh, and how could I forget Hades Shard...

Even if the surprise factor is lost, a 7 strength sentry is nothing to sneeze at if the runner doesn't have a Femme or a usable Switchblade handy. And, while I don't see ever having three copies of this in a deck (and not just because it's unique), it sure is fun to drop a single one in a Jinteki deck every now and then—it might just win you the game.

(The Universe of Tomorrow era)
Pikeman 267
Its also pretty good at deflecting a runner from a server hosting an agenda. Not many runners can deal with a 7 Strength Sentry mid run. It works wonders in RP where it taxes the runner's clicks. You just made them waste a click running into archives, depriving them of their chance to try at a Caprice Psi game in the remote. :) — Kasusfactus 20 Sep 2015
It is/was mainly popular because PPVP Kate can (usually) only use Atman or *a lot* of Datasucker tokens to break SNM. — Korrigan 21 Sep 2015
Killers are across the board the most expensive icebreakers to use, so if you think of Susanoo as an effective 7 str End-The-Run (as long as you don't have any agendas in archives), then she's actually pretty well priced. The archives shenanigans can be fun (consider Space Camp as well), but I would think of them as more of a consolation prize than the main purpose of this card (setting all that up is unreliable at best). Finally, consider than Femme Fatale ALSO costs 9 credits, so if it's hard installed on Susanoo, the credit swing is even (and you still get a 1 credit taxer out of it). — Bigguyforyou518 21 Sep 2015
Does nothing to protect Archives in my Industrial Genomics deck. 0/10. — WayneMcPain 21 Sep 2015
Also minor note - if you have an unrezzed ice on archives but want them to actually access archives instead, the ice will NOT be considered encounted if you choose not to rez it (same way Inside Job works). — Bigguyforyou518 21 Sep 2015
Wormhole sais hi. — tsuruki23 23 Sep 2015
@Bigguyforyou518 - Thanks for that note, I'll update the review. — Pikeman 3 Oct 2015
If you're feeling really cheeky and have Crick on archives, you can also use this encounter to reinstall Ronin or some other trashed asset. — Agenarchi 3 May 2016
Would also pair nice with Excalibur. If you can set it up where the runner hits Excalibur, then Susanoo. — Nick! 5 Jul 2016
There is a new synergy for this guy, in Jinteki Replicating Perfection: DNA Tracker, an in-house Code Gate with devastating taxation subroutines that costs around the same as a Tollbooth encounter to break fully for the majority of Decoders. If DNA Tracker is the outermost ICE of archives in RP, and why wouldn't it be given the current meta of Omar Keung and Temujin Contract, Susan's "effective ETR subroutine" becomes nightmarish. This is obviously a very credit-rich corporation deck we are talking about but it's not at all unreasonable. — umbralAeronaut 19 Oct 2016