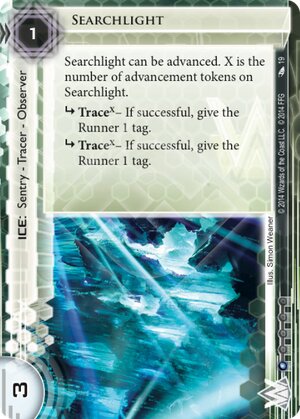 Searchlight can be advanced. X is the number of advancement tokens on Searchlight.

subroutineTrace [X]– If successful, give the Runner 1 tag.

subroutineTrace [X]– If successful, give the Runner 1 tag.

Searchlight's major advantages are that it is cheap to rez and does not require much in the way of advancement to become a concern for the runner.

For the same price as Caduceus (3 credits), you have two trace subroutines that provide tags. If both land, you have enough for Traffic Accident - if just one lands, that's a Scorched Earth. With that initial investment, the runner is spending four credits if they don't have Mimic on the board. The Corp can then choose to make that tax even greater by advancing it further. In some ways, this represents FFG realizing that advancement ice needs to be more cost-effective in order to work well. On the face of it, Searchlight is a cheap taxing ice that can be increased in power throughout the course of the game.

Why is it not played? Well, I think there's two reasons.

Firstly, advancement ice's problems are still an issue with Searchlight. With Caduceus, putting down that strength 3 sentry only costs one click and then the initial three credits to rez, which will likely be made back. Searchlight costs a click to put down, and then two clicks and two credits to have two fairly weak traces that don't stop runs. That's a time commitment that the corp cannot afford. Cards like Shipment from Kaguya could possibly help, but the support pieces for advancement ice take up space for cards that provide stronger effects. Who would run Constellation Protocol or Satellite Grid when they need Crisium Grid, Ash 2X3ZB9CY or Caprice Nisei? Plus, Weyland often imports NBN cards to deliver tags, and Searchlight doesn't provide the same oomph that something like Data Raven does.

Secondly, uh, I've been talking about Caduceus a lot, because that's Weyland's "other sentry" besides Archer, and it's just, kind of... better? Its strength is immediate, whereas Searchlight needs to be powered up. Caduceus can make a credit swing in a way that Searchlight can't, and it can also end a run. It's just a better choice right now if you want a taxing sentry that's cheap and effective.

One tiny advantage Searchlight has is that, although both lose to Mimic, Searchlight costs the same to break but is cheaper to rez. It might be better to think of Searchlight as the Pop-up Window of Weyland - two or three credits for an effect that is meant to tax the runner in the early game but won't necessarily stop them. But Caduceus is a much better choice overall. If FFG releases cards that make advancement ice stronger, then Searchlight might find a place enabling Weyland Tag-n-Bag decks as a source of tagging that doesn't require importing from NBN.

(Data and Destiny era)
ClockwiseMan 4
It's worth mentioning that in the same ballpark is Hunter, which stymies Mimic, and is the same price for more of an effect. — RubbishyUsername 8 Jan 2016
I think this could be used for those Wormhole/Orion subs for when you HAVE to tag the runner - you can make a single copy of Searchlight's subs nasty with advancement counters, and then fire one of them with a "Resolve a subroutine on another piece of ice" — HandKing 13 Sep 2016