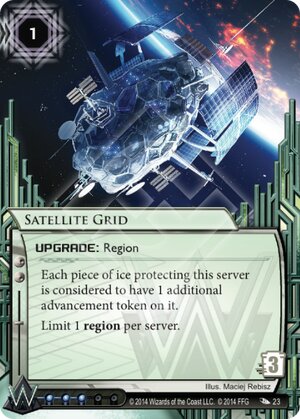 Each piece of ice protecting this server is considered to have 1 additional advancement token on it.

Illustrated by Maciej Rebisz
Decklists with this card

Awesome card. Consider this: It makes Woodcutter and Tyrand (and Salvage lol) bite the first time you rez them. Also, for the purpose of the ICE suite that cost 3c less to rez for each advancement counter on them, Satellite Grid is like a super Akitaro Watanabe.

Is this going to work with Weyland Consortium: Builder of Nations?

Since it will advance cards that aren't normally advancable, would it make Neural Katana do 3 net damage plus 1 meat damage (or two if you have scored a The Cleaners.

(Blood Money era)
paulxthompson 234
Someone correct me if I am wrong, but I think we are still waiting on an official ruling for the BoN + Satellite Grid interaction. My gut says that an ice with zero advancement counters + one additional counter is at an effective one counter, triggering BoN. That said, another way to add counters to ice that can't be advanced is PAD Factory, and that interaction certainly works. IMO BoN is better as a rush identity, and using clicks to advance ice works against this concept, but if that's the route you want to go I think PAD Factory is the best way to do it. When Mausolus comes out Dedication Ceremony also becomes an interesting choice. — FarCryFromHuman 25 Aug 2016
2

@Nillis: I don't think the two cards can interact. Satellite Grid specifies that the advanceable ICE protecting the server "is /considered/ to have 1 additional advancement token on it", not that it actually does. It's not a token you can move, rather it's more like all the ICE in the server just has a +1 to whatever advancement token bonus it would have by default. You can't move a token that isn't there, as it were.

(All That Remains era)
Kaziglu_Bey 3
1

The usefulness of this card seems to hinge on whether you're running Trick of Light in the same deck. While it can be nice to save a click and a credit on advancing a piece of ice, that token will not actually be there for the purpose of Trick of Light (or Constellation Protocol for that matter). If you're running something like the aforementioned Tyrant and Woodcutter, this might be worth the deck slot -- but often it sadly does not make the cut.

(Order and Chaos era)
spiralshadow 45
Even if you are running Trick of Light, it's still nice for your #Ice Wall to have 4 strength instead of 3 until you're ready to take the counters off it (and then once you do, it'll have 2 strength instead of 1). — Lttlefoot 4 Mar 2015
1

I think that this is a nice region for weyland's advancable ice, but I think the real question to ask is whether or not this card combined with constellation protocol will allow you to have infinite advancement counters for your ice. I don't think it will work like that, but out of all the forums I haven't seen anyone talk about it yet, and I wonder what everyone thinks about it

(All That Remains era)
Nillis 2
I think it's a flat +1. There is no token to move so you cannot generate advancements to move onto other ice — LordWei 4 Mar 2015