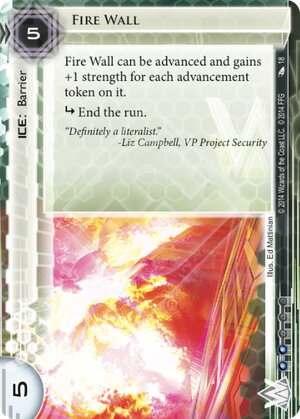 Fire Wall can be advanced and gains +1 strength for each advancement token on it.

Hi Fire Wall, you've been out for like a year now or something.

Most breakers will break this ice for 4 credits average.

It also happens to be really good against Atman before Datasucker counters are out. Since it increases strength for each counter, you can just click the wall once and that Atman isn't a problem anymore!

For an ice the rez to strength ratio is really nice for its position on the curve. Especially for a card so high up on the curve. Compared to other midrange ice, the only card that really compares to this puppy is Eli for the 4 cost to break (*rolls eyes* except for Cerberus "Lady" H1). If you want an ETR ice that is also taxing for later, here you go!

Resistant to instant explosion because Parasite

Because it is such a high strength ice you have an entire 5 turns until a bare Parasite just blows it up and makes it sleep in archives for the rest of time. You still have to worry about Datasucker though.

Oh man, a taxing 4 cost to get through ice that only costs 2 influence? To include three out of Weyland it just costs 6 influence total! I find the difference between dedicating you deck around an out of faction card is between 2-3 influence. Usually 1 influence cards are utility cards. Like Jackson Howard and Back Channels. 2 influence cards are usually just solid cards that you can include when you have like, 2 spare influence.

Well, like its advancable and usually clicking to advance ice is a really bad idea. You're wasting clicks on your turn that you could be doing other things with, like winning XD. You could play around this by including like, space ice asset stuff like Space Camp? You go for it... person... who... Weyland Consortium: Because We Built It ...

Yeah uh, this is the same problem that Bastion has, but Bastion isn't like significantly taxing (three credits to get in isn't a big deal), (four is a Sure Gamble). So when you rez this card, you're investing a significant amount of money in there. On the bright side, you'll be making that rez cost back in two runs (which is typical for most ice).

Overall and how to use

I like this card, this card serves its purpose. When you need a midrange ice that's moderately taxing you can throw this card in. It also happens to have synergy with Tennin Institute: The Secrets Within as it is resistant to blowing up and can become really, really taxing later when it has like three counters on it.

Oh man that subtext is hilarious (I take no credit for noticing this) its a continuation of Ice Wall's's subtext. This is the orginal subtext

"I asked for ice as impenetrable as a wall. I can't decide if someone down in R&D has a warped sense of humor or just a very literal mind." -Liz Campbell, VP Project Security

and this is Fire Wall's text

(23 Seconds era)
debraken21 47
The new Weyland identity gives Fire Wall a new lease on life. 5 credits for a somewhat taxing ETR and a point of meat damage is pretty good! — FarCryFromHuman 9 Aug 2016
I think the biggest weakness is David. You can't really be paying 5 credits for etr ICE that only eats a single counter. — whirrun 13 Aug 2016