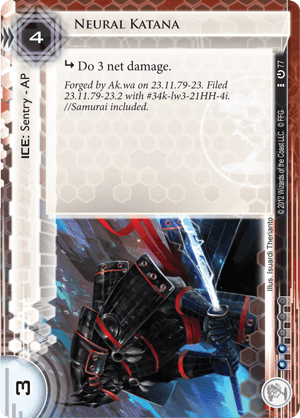 The Katana is absolutely a meta-shaper straight out of the box. When you are learning the game, this is the ICE that teaches runners to facecheck Jinteki with caution until their killer is found. 3 net damage can set a runner back if not outright kill them. Once rezzed, the sword will keep runners who can't break it out.

Here's the little exercise that everyone does with the core set. It teaches faction strengths and weaknesses, deckbuilding strategies, AND basic math skills.

How Much Does It Cost to Get Through Neural Katana?

Ding ding ding! The cheapest-to-install killer of the bunch breaks through Katana for 3-5 times less than the competition. And Mimic only costs 1 influence, so every runner can use it! As a bonus, we also see why no one uses Pipeline.

So for your 4 to rez, you're probably getting a 1 tax per run. That's atrociously bad. So the corp learns to only rez this if it'll fire, and to just install over it if they have a Mimic on the table.

As the card pool expanded, more and more better options emerged, pushing Katana out of slottable range and onto the island of misfit ICE with Cell Portal, Matrix Analyzer, Shadow, and Heimdall 1.0.

EDIT: It's notable that Katana has the highest damage of any hard damage subroutine (barring situational Cortex Lock), making it the best candidate for Batty kill). Thx @WayneMcPain for pointing this out!

Katana will probably never be used unless a Core Set 2.0 errata occurs where its rez cost is halved, or Mimic's install and/or influence costs would increase.

(Fear the Masses era)
PureFlight 1014
It can be really strong with Marcus Batty in a flatline deck. But yeah, outside of that edge case, it's not great. Shame on you for mentioning Shadow alongside it though! — WayneMcPain 12 Jul 2016
You're right, Shadow is better than some of those, and the fact that it has two subs is nice. Still, its use is limited, and when compared to Katana I think it's equally underwhelming. — PureFlight 19 Sep 2016
3

One of the defining pieces of Jinteki ICE, the reason it receives a high impact is because of one reason. As a Sentry, it was powerful enough to severely set the runner back if it was facechecked, (run while it is unrezzed and encounter it with no breakers but ones face) and that meant that many runners would seek out their killer before beginning a run on Jinteki.

It also is a very standard archetype for Jinteki ICE, that many other pieces like Komainu and Pup follow with, Sentry - AP ICE doing packets or streams of net damage to the runner.

While Neural Katana has fallen out of favor for more taxing ICE like the above two, or for including more ETR ICE, it has a place as a special memory, and only one other piece of Jinteki ICE can do that much damage with a single subroutine.Cortex Lock is very similar, and possibly even better early game. Katana always fell off when the Killer was found, not even being much of a tax. Cortex Lock falls off even faster even without a Killer, but can be potentially more damage. So while not a straight 'better' card, Neural Katana's situational usefulness may be better achieved with Cortex Lock

(Breaker Bay era)
lynkfox 356
This review has a lot of reference to other parts of the article it was originally from. It might make more sense if those references were cleaned up / turned into links to the cards being referred to. — Ber 6 May 2015
0

Sometimes it's good to revisit old ice in light of new icebreakers.

Most ice breakers break Neutral Katana for 3 or 4. There are a few exceptions, the most important two are:

While Mimic is less of a threat these days Na'Not'K is just getting started. And while as a faceplant trap the runner has to pay 4 for Na'Not'K if you have 4 in hand you can easily rez a Cortex Lock as well so a runner with Na'Not'K has to reserve 4 anyway or risk severe net damage.

Sorry Katana, but you've been replaced.

EDIT: A previous version said that Na'Not'K breaks Cortex Lock for 7. This is incorrect, even in a single ice server with just Cortex Lock Na'Not'K gets +1 strength.

(Free Mars era)
Silv 295
It was the original reason to install Killers first, but has been outclassed as time went on. Komainu is better at its job for just a credit more. Cortex lock is more efficient and harder to break...until the memory is filled. Chrysalis is a very similar piece of ice with the ambush bonus. — Severijn 9 Aug 2017
It's 4 to break Cortex lock with nanotk. Actually better than mongoose — quailman2101 9 Aug 2017
@quailman2101 You're right, my bad. I forgot to add the 1 strength bonus from the ice. — Silv 10 Aug 2017
I think the main problem is that there are rarely any killers that pay more to break a 3 strength sentry than to break a 2 strength sentry, which kinda makes the extra strength Katana has over Chrysalis pointless. Katana is sacry if it hits, but not really taxing once the runner has an answer. — Krams 10 Aug 2017