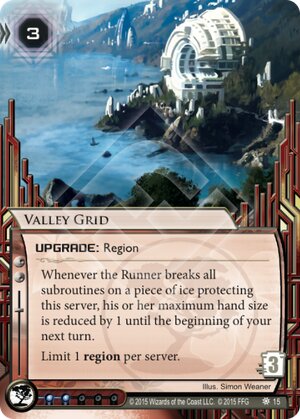 Whenever the Runner fully breaks a piece of ice protecting this server, they get -1 maximum hand size until the beginning of your next turn.

I love the idea of the card, and making the runner choose to take damage over the course of the run, or face losing hand size. The runner has to gauge the likelihood of a trap in this case more than normal. It used to be, break everything, and have 2 cards per advance. Now you can't necessarily do this, and might result in them jacking out, leading to a score.

This card opens up the runner to be flatlined by a Ronin without first having to trick the runner into taking brain dmg. The great thing about this card is that you can now force the runner into loosing a considerable amount of hand size (2-3) from merely running on your scoring server or even running on a central for which the runner has multi-access capacity.

Moreover, Valley Grid might be a kind of staple card for Jinteki Biotech: Life imagined ID when using "The Brewery" (the one that does 2 net dmg). With this combination, one might be able to play without Ronin altogether: now you only need to land 1 or 2 brain dmg, and have a scoring server that is 2 or 3 ice deep. This creates a win-win situation for the Corp: if the runner goes into the server with Valley Grid, then you can flatline with the Corp ID ability. But if the runner doesn't go into the server, then you just score your agenda.

All in all, this card might be a fun splash in any glacier deck.

(Order and Chaos era)
benticurus 1707
You can making a scoring server four ice deep and not even bother with brain damage. Just make sure the runner has to break every subroutine on every ice - no chum, no tsurugi. I have a deck demonstrating it but valley grid isn't showing up in published deck lists yet. — Lttlefoot 31 Mar 2015
Lttlefoot, I've been thinking the same thing! Neural Katanal, Cortex Lock (if it does at least 2 damage), and ice with only "end the run" subroutines are seriously threatening in front of a Valley Grid. — PaxCecilia 31 Mar 2015
Neural katana is a bit of a nonbo. The runner can just let it resolve if they know they will have to discard down to their max hand size at the end of their turn, and then it won't trigger the grid. — Lttlefoot 31 Mar 2015
Indeed. Net Damage is irrelevant if you're going to have a reduced hand size. The ultimate server would be 3 Guards in front of a Fetal AI with Valley Grid protecting it. That way the runner can't even bypass the Ice with Femme or Inside Job.... — Wookiee 4 Apr 2015
Fetal AI won't do anythimg but — MrCivilised 5 Apr 2015
"If the Runner takes more damage than the number of cards in his grip, or if he has a maximum hand size of less than zero at the end of his turn, then he is flatlined and the Corporation wins the game." This means if you have at least 6 end-the-run or brain damage subroutines, the server will be an automatic flatline, barring blackmail or bypass abilities XD — Bigguyforyou518 10 Apr 2015
Going to try this in a Government Takeover scorch deck instead of snares. — ZomB 18 Apr 2015