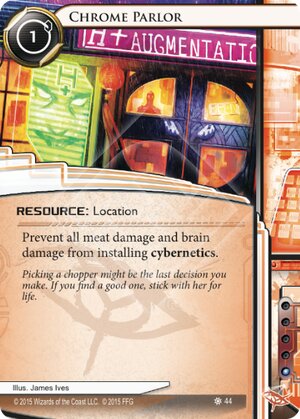 Prevent all meat damage and brain damage from installing cybernetics.

Picking a chopper might be the last decision you make. If you find a good one, stick with her for life.
Illustrated by James Ives
Decklists with this card

Chrome Parlor is the worst kind of combo card: not only does it do nothing until its pieces come into play, but it also does nothing if you happen to draw it after the other combo pieces (compare to Adjusted Chronotype/Wyldside). Even if it was tutorable (it isn't), this card would still be "meh", because its ability is honestly underwhelming unless triggered repeatedly (and there's not a strong reason to play with more than one of the cybernetics cards right now).

Net-Ready Eyes and Brain Cage are the only cards that are crucial in the decks they're included in, and their damage can be played around fairly easily.

If the cybernetics cards themselves were more powerful, and this card was actually a new runner ID instead, then we might be cooking something. But as it stands, Chrome Parlor is too weak and clunky to bother with.

(The Universe of Tomorrow era)
Bigguyforyou518 1719
An ID with this ability, and a few more cybernetics cards, would be pretty awesome and thematic... — Phoenix 15 Sep 2015
I think the problem lies not in this card being weak, but that there are so few cybernetics so far and they do not really synergize well. It just takes 1 or 2 more interesting cybernetics to bring this one around. — Capstone 15 Sep 2015
Welp, this card seems even more weak now; Anarch now have cards that let them abuse getting damaged. — Quarg 8 Sep 2017