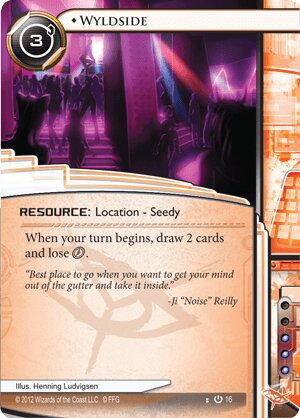 When your turn begins, draw 2 cards and lose click.

"Best place to go when you want to get your mind out of the gutter and take it inside." -Ji "Noise" Reilly
Illustrated by Henning Ludvigsen
Decklists with this card

Party hard and pull everything out of your deck in half the time. It is very useful with the hand space through Public Sympathy, but it also works when you simply need to up your aggression. However, it is a mandatory effect that you can only remove with Aesop's Pawnshop, so keep at least one handy in any deck that runs this. Nothing is more sad than having 3 clicks as a runner with zero cards in your deck.

When using with Order and Chaos cards, think hard before using Day Job in any deck with this. The two cannot be used together, so use other event economy such as Liberated Account or Lucky Find.

Edit 4/29/15: Now you can combine this with Adjusted Chronotype to keep all of your clicks and still have the card draw. From Breaker Bay onward, this combo is amazing for any Anarch deck that needs more draw power. The influence cost of the combo is steep for other factions, however.