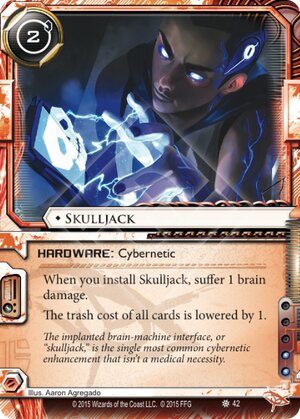 When you install this hardware, suffer 1 core damage.

The trash cost of each Corp card is lowered by 1.

The implanted brain-machine interface, or "skulljack," is the single most common cybernetic enhancement that isn't a medical necessity.
Illustrated by Aaron Agregado
Decklists with this card

Scrubber is an almost universally superior card to this. They have the same install cost, but this also has the heavy additional cost of suffering a brain damage. The brain damage can be avoided by installing Chrome Parlor first, but with the present cybernetics card choices it is very difficult to justify fitting this into a deck.

Once installed, in order for this to pay off better than Scrubber's two recurring credits, you would need to trash at least 3 cards in a single turn. Also, Scrubber is not unique, so you can install multiple of them if you draw them.

The only advantage this has over Scrubber is that it is hardware, which is harder to destroy, but that does not even come close to justifying playing this card.

Even the rarely-played Paricia is significantly better than this. Don't play this card in serious decks.

(The Underway era)
Ber 2615
It's probably not enough to make it playable, but it's worth noting that Skulljack works with the upcoming Political Operative, and against Product Recall. Scrubber and Paricia don't help you with either of those. — NullOperative 16 Mar 2016
There might be some synergy here with Apex, particularly given how popular asset spam decks are as of this writing. (Just after Democracy and Dogma.) Apex can't install scrubber, and Paricia takes memory that Apex frequently doesn't have. (And Apex can bounce the brain damage off of his console.) Not sure if being useful for a marginal runner is enough to save this marginal card, but it's worth keeping in mind as a use-case. — Bwob 20 Apr 2016
9

With all the asset and upgrade spam happening these days, such as in RP and NEH, this card is nothing but a 1 cheaper Desperado that synergizes well with Chrome Parlor and other cybernetics, especially Titanium Ribs. Since you probably want Chrome Parlor and/or Titanium Ribs in your deck anyway, both of these being good cards in their own right, this card is actually playable, unlike Desperado. It's still not as good as a Sure Gamble, but not much is. It's way better than Scrubber because hardware is much more permanent than resources.

(The Underway era)
ZenCadenza 97
I am loving all your reviews today. — derin 28 Jul 2015
Anyone reading these troll reviews, please upvote the other, genuine reviews for these cards, to help bury the troll reviews. — Ber 29 Jul 2015
You can always troll at his published decklists. Please do actually :), they may even reach the first page with all the comments they will get ;) — ZiNOS 29 Jul 2015