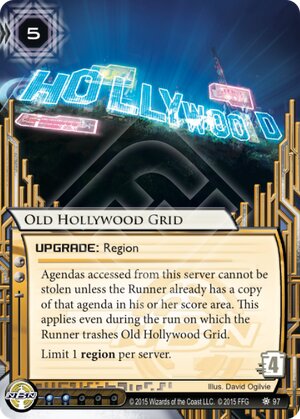 Persistent → The Runner cannot steal agendas from this server or its root. Ignore this ability for any agenda the Runner has a copy of in their score area. (If the Runner trashes this card while accessing it, this ability still applies for the remainder of this run.)

Illustrated by David Ogilvie
Decklists with this card

Destruction is a thing - but using rez cost mitigation (like the Root), Marcus Batty an Caprice to keep a runner out or make him pay dearly for the run, Ash to make it hard to steal... this card has distinct possiblities, left to brighter minds than mine to find. One way or another, it has the potential for significant utility - up there with SanSan.

(Old Hollywood era)
Shannon.L 114
Ahh, yes, I can imagine that world... and I imagine it with a deck that simply doesn't have any agenda more than once. — Krams 12 Aug 2015
Two words: Goverment Takeover — Voron 13 Aug 2015
And the Fragments are a natural fit for this. 15 Minutes, too. Pair this with Ash, recursion (Interns, Architect, Crick...) and the server becomes moot quickly. — LynxMegaCorp 13 Aug 2015
I've been playing this with a one of Vanity Project and RSVP in Haarpsichord. It never dissapoints. — Kronosdev 14 Aug 2015