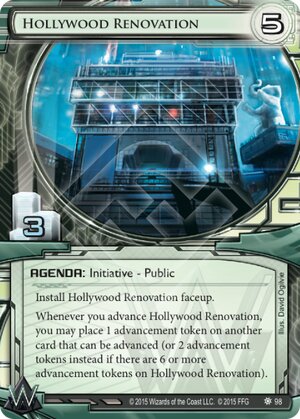 Illustrated by David Ogilvie
Decklists with this card

Jank aside, this agenda works well with advanceable ICE. Even buffing something as simple as an Ice Wall to 6 strength while scoring this agenda is actually quite efficient. One of the very few agendas in the game that allow you to increase defenses while scoring it. The synergy sounds useful for a Weyland glacier build.

...and then back to the jank: slap this on Off the Grid, have advanceable ice on HQ and advance away to your heart's content. Proceed to lose the game to D4v1d.

(Old Hollywood era)
Talism 80
Maybe I'm missing something, but I don't think this works. IAA Hollywood Renovation, that's 2 advancement counters. Next turn, double Biotic, leaving you with 5 clicks. Install 2 agendas, you're down to 3 clicks. AAA Hollywood Renovation and you have 3 advancement counters to dole out between the 2 naked agendas... what am I missing? — moistloaf 13 Aug 2015
Here's a better jank: Biotic, Mushin Hollywood, Ice and install Vanity Project in open server. next turn, Biotic, advance Hollywood 4 times, score both agendas for the win. so all you have to do is have 2 biotic labors, a mushin, Hollywood, and Vanity in hand, 12 credits, and the runner can't steal anything. totally doable. — WayneMcPain 13 Aug 2015
Mushin this to a secure server, put one more advancement on it. With 4 counters on Hollywood, the next Atlas you draw can be scored from hand. Install Atlas, advance Hollywood Renovation twice, put 3 advancements on Atlas, score Atlas. 6 on Hollywood means you can also score 4/2:s from hand. A weird kind of fast advance where you drop this in a server and let it sit there while the runner looks at it longingly. — tendermovement 13 Aug 2015
http://netrunnerdb.com/en/decklist/24844/the-one-two-punch Made a deck to match my previous post. enjoy. — WayneMcPain 13 Aug 2015
Mushin creates a NEW server. — LynxMegaCorp 13 Aug 2015
Mushin doesn't work with this card as you are placing advancements on the card NOT advancing the card theirs a differnce — Pinkwarrior 13 Aug 2015
You don't use Mushin to get the immediate Hollywood effect, you use Mushin to help you rush to the 6 or more advancement tokens effect. — Yubinshan 14 Aug 2015
0

Hollywood has many combos, but in my opinion its simplest and best friend for fast advance is Mumbad Construction Co.. If MCC is on the table and the runner didn't trash it immediately, rez at the end of the runner's turn for 1 advancement token. Install-advance-advance Hollywood Renovation and target MCC with its ability, then pay six credits to move the MCC advancement tokens back onto Hollywood. Boom. 3 points, 12 credits spent, with immediate threat of repeating next turn if you have another Hollywood in hand, this time for only 8 credits. Runner thinking Weyland be slow? Runner be down 6 points now...

Usual caveats for fast advance apply (cough Clot cough), but be aware that Political Operative can ruin your day in this case as well.

You can´t advance MCC, but you can place advancement tokens on it just as you can with Tennin Institute: The Secrets Within

@m.p Normally yes, but this Hollywood Renovation specifically stated the target must be advanceable