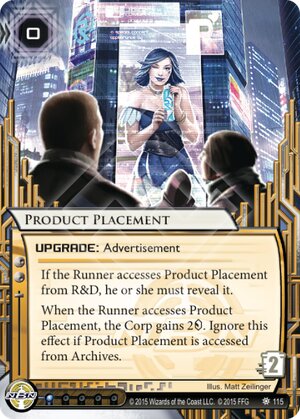 While the Runner is accessing this upgrade in R&D, they must reveal it.

When the Runner accesses this upgrade anywhere except in Archives, gain 2credit.

This is a very strong card in Spark Agency: Worldswide Reach decks, providing yet another way of reducing the runner's credits. Since it is an upgrade it can act as a dummy agenda, and further, multiple copies of this card can be placed in a single server. With Ad Blitz the card can be brought back into play once trashed too!

Looking at the numbers, in a Spark Agency: Worldswide Reach deck the card leads to a 5-credit swing if trashed (corp +2, runner -3 assuming it is the first rezzed advertisement that turn). If left there, the swing is 3 credits (under the same assumption). But in this case the runner may have to run into this card again!

The card does well defending R&D, but is also very good in a strong remote (for instance, one with Tollbooth guarding it). Installation may force the runner to check the remote server in case there is an AstroScript Pilot Program or similar agenda in there. Multiple copies of the card in a remote are sure to annoy the runner! And at some point an actual agenda could be sneaked in...as such this offers some extra possibilities for scoring and taxing after Clot is on the table.

(Data and Destiny era)
Hayati 51
Still not clear how this works with Spark, because it has to be rezzed in a remote for the ID to kick in. That's before the runner decides sucessfull run or not, meaning: there's no access and it's only a credit swing of 1.. meh. — Crashdown 20 Nov 2015
Put it in a remote with other cards pal :) — Hayati 20 Nov 2015
Also- as per the FAQ on run timing, the runner decides to access the remote server at step 4.2. At step 4.3 the card can then be rezzed, and the runner has to access it via steps 4.4 and 4.5. — Hayati 20 Nov 2015
I just wanted to add that I am considering putting this in a non-Spark deck just because it's still that good. Spark does help it by taking the swing from 4 to 5 and the timing of that may be additionally useful, but a swing of 4+ by itself is still pretty good. It can still pretend to be an agenda in non-Spark. In particular, I think this is a pretty interesting way to deter runners from running stuff like Jackson Howard. You can put this as it's own remote and if they don't check it then you can install Jackson Howard in the same server. — Raiddinn 25 Jul 2016

@Crashdown I'm assuming that the way this card works is that the corp would essentially never rez it, but rather keep it facedown in either the root of a central, or in a remote combined with other cards. Leaving this as a hidden tax whenever the runner tries to acess that server. Obvious synergies include NAPD contract and red herrings, allowing for maximum taxation (11 credits) in order to steal the NAPD, and thats before considering the cost to trash. Throw a couple of pop up windows in front of it, and you've got a serious ecconomoc drain on any runner frisky enough to make a run on that server.