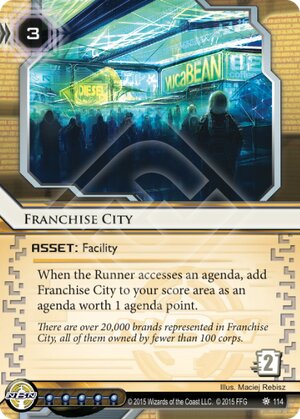 While the Runner is accessing an agenda in R&D, they must reveal it.

When the Runner accesses an agenda, add this asset to your score area as an agenda worth 1 agenda point.

There are over 20,000 brands represented in Franchise City, all of them owned by fewer than 100 corps.
Illustrated by Maciej Rebisz
Decklists with this card

This card could be utilized in a Haarpsichord Studios: Entertainment Unleashed deck that seeks a scoring win. Play out two agendas of the same value along with this asset to three naked remotes.

The runner can at most steal one agenda per turn, but if they run on the remotes then there is a (2/3) possibility that they also give you a bonus point (i.e. they access an agenda first). Be sure to rez this card only as the runner is about to access one of the remote agendas! On your turn you score out the other agenda and come out a point ahead.

On the other hand, if the runner does not run on the remotes, you can score one of the agendas and then play another one to the table to provide them with the same dilemma all over again!

If the runner accesses this card first and trashes it (1/3 of the time) then they drop two credits, which is also not bad.

It seems that this card would work very well when combined with News Team and numerous low point agendas. It may be hard for the runner to avoid falling behind in the scoring game with these tactics combined with the ID restriction. They can at most score one agenda per turn, sometimes they give you a bonus point when scoring, and sometimes they hit a News Team that either tags them or results in the loss of a valuable point.

(Data and Destiny era)
Hayati 51
And sometimes they hit your Team Sponsorship and can't trash it. — FarCryFromHuman 20 Nov 2015
2

Just wanted to flag interaction with Quantum Predictive Model here...QPM triggers on access and I THINK the result is you can rez this after they pass their last jack out window and claim two Agenda points. It's a neat interaction, but it requires them to be tagged which is unfortunate as you can't just naked remote the QPM unless the runner is tag floating and sticking it behind a solitary Data Raven is liable to raise eyebrows.

2 cost trash means it can't really be just left out undefended unless you've got potential traps lying around, although if you defend it with a single Kitsune you can rez and activate this on approach, then send them at an agenda in HQ (QPM with a tagged runner is obviously the dream, but that's way too many moving parts to really have a go at).

Given that Kitsune has decent interactions with News Team and this works best with low cost Agendas, it might be worth including one or two copies in the deck Hayati is proposing. Plus with Haarpsichord Studios: Entertainment Unleashed Kitsune can also hilariously throw the Runner at a one-point Agenda while they're running on something bigger...but that's a story for another review. It does seem to have several specific points of synergy in this build though.

(Data and Destiny era)
LordRandomness 236
15 minutes is an even better kitsune fire. Get your point and take theirs back. — Sabin76 18 Dec 2015
I just stumbled across 15 minutes and was heading here to edit it in. Looks like you beat me to it! Also it turns out I can't write the big "why Kitsune is good in Haarpsichord" review I was planning because I don't have any reputation, but it turns out there's a whole pile of synergies there that make it worth looking into. — LordRandomness 20 Dec 2015