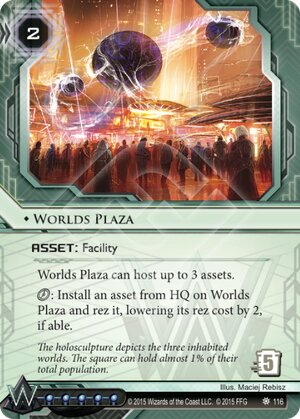 Worlds Plaza can host up to 3 assets.

click: Install an asset from HQ on Worlds Plaza and rez it, lowering its rez cost by 2, if able.

The holosculpture depicts the three inhabited worlds. The square can hold almost 1% of their total population.
Illustrated by Maciej Rebisz
Decklists with this card

What is the appeal of this card?

Let's get the obvious bad parts of this card out of the way: yes, the Runner can trash this card and ALL the assets you've put on it for 5. That means, worst case scenario, the runner can trash four clicks and a bunch of credits worth of assets for cheap. So how do we stop this? By making it not cheap.

The payoff you get is twofold: first of all, you get your assets cheaper. This can be huge for economy assets like Adonis and Eve Campaign, more disruptive elements like Hostile Infrastructure and Elizabeth Mills, and even pure value like Public Support. In this game of ours, cash is king, and Worlds Plaza can set up an asset economy fast and cheap.

Secondly, you can defend your asset economy with a single row of ICE. This is the big apeal of the card, as the problem with Asset economies has always been that the runner can trash your stuff and you can never have enough ICE to protect them suffieiently while also scoring agendas. Worlds Plaza solves that problem by allowing you to make a four-deep server protecting your valuable assets.

I think Worlds Plaza is an undeniably powerful card that may put Asset economies back on the map outside of Jinteki: Replicating Perfection. Powerful enough to, even at 5 influence, splash out of faction. It enables you to create an asset economy without fear of #Imp, by ICEing up your assets, as well as protecting all of them with a single Ash 2X3ZB9CY or Marcus Batty.

Try the card in a glacier deck. You won't be dissapointed.

(The Universe of Tomorrow era)
HolyMackerel 1202
Does the runner access the hosted assets? — CptHilts 14 Sep 2015
As far as i know, yes. I believe there was a ruling at some point that said the runner could access the ice on Awakening Center, but I can't find it now. This would imply that you can access the cards on Worlds Plaza. — nicohasa 14 Sep 2015
Might be interesting in combination with off the grid in a super jank glacier :D — sod_timber_wolf 14 Sep 2015
What happens in combination with Blue Sun? Is the rez cost still lowered or can you bounce things back for full? — GrimOsenia 15 Sep 2015
Say you had 4 assets hosted on World's Plaza, and one of them is Hostile Infrastructure. When the Plaza gets trashed, does the runner take 5 net damage? — Vaslav 15 Sep 2015
They take 1 net damage as the runner specifically is trashing 1 asset; 'the game' trashes the cards installed on WP when it dies. Note you also can't host 4 assets on Worlds Plaza... — unitled 15 Sep 2015
Could you use a Cerebral Overwriter or some other trap to protect the other 2 assets? — Retraux 15 Sep 2015
You can try, but it would be installed rez, and they can just access/trash the Worlds Plaza to avoid accessing it. — unitled 15 Sep 2015
Is there a ruling yet if the Runner has to access the Assets hosted on Worlds Plaza yet... as normally the Runner has to access ALL cards in the server? — dasher 16 Sep 2015
The Runner has to access all cards in a server, so yes, unless they trash Worlds Plaza, they will have to access everything hosted on it. Remember, though, the runner chooses the order of accesses. Also remember, everything hosted on it is rezzed, and as such it's very hard to make the runner access/trick the runner into accessing anything with it they don't want to. — unitled 16 Sep 2015
@unitled If the runner could access cards hosted on Worlds Plaza I think they would be subject to the same rules, which means the runner accesses ALL cards when they hit the server. I wish we could get a clarification on the rules for this card, I can see two completely different uses depending on the interaction. If the runner cannot access cards (installed on worlds plaza not server) it serves as a good place to host Executive cards while denying the runner a chance to grab free points. If the runner does access cards hosted, it's a good place to put something like Cerebral Overwriter and two Public support, forcing the runner to choose between damage to the face or letting the corp score. — TheWackyWombat 16 Sep 2015
@TheWackyWombat You can access cards hosted on Worlds Plaza, this is pretty clear. The issue is that while you have to access all cards in a server, you pick the order you access them in. If you access the Worlds Plaza first, you can trash it, and anything hosted on it is instantly trashed. If you put an Executive and an Overwriter on it, you can access the executive, trash and steal, then access and trash the Worlds Plaza to destroy the Overwriter before you access. — unitled 16 Sep 2015
I'd put three Hostile Infrastuctures on it. — tendermovement 20 Nov 2015
I have the same question GrimOsenia has. The way I read it, Blue Sun would be able to bounce a card back to HQ for full credits. Unlike Breaker Bay which has a constant effect on cards in the same server, this card seems to lower the rez cost on install then its ability is done. — quailman2101 1 Dec 2015
Can you use tech startup to install directly to worlds plaza? Or do you need to use worlds plaza's effect to install to it? — mmik 14 Dec 2015
Things can only be hosted by abilities that specifically host them or in ways specified by cards. So, no, you cannot tech startup something onto worlds plaza. — EnderA 5 Mar 2016
Can we mention the interaction with another Weyland card ? Like Surat City Grid for example... Can be a big economic boost — satsoc 30 May 2016

Note: You CAN actually Tech Startup on to this card, same with Full Immersion RecStudio. It would be installed face-down (without the discount on rez). The click ability does not, in any way, restricts its hosting ability.

I stand corrected. >From NISEI Comprehensive Rules Document (version 1.4), 1.12.5.b If a card has an ability describing cards it can host, but also one or more abilities that can create host relationships onto itself, then it only allows cards to become hosted on it through those abilities. A card cannot be installed directly onto the card through an unrelated install effect. Example: Glenn Station reads, “Glenn Station can host a single card”, but also has a paid ability that hosts a card on itself. Therefore, Glenn Station only lets the Corp host cards through that paid ability, not through an install action.