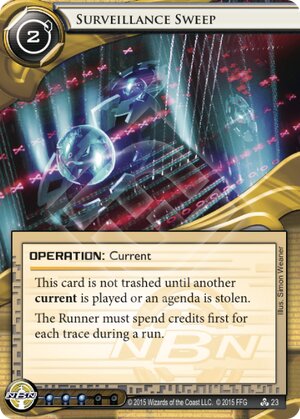 The Runner must spend credits first for each trace attempt during a run.

Surveillance Sweep fits in a weird position: it's a current that helps a glacier style deck... in the faction known for having a lot of currents, almost never putting more than two ices on top of each other and if possible just scoring out of hand. Would that fit in a typical asset spam NBN: Controlling the Message deck? Or in a butcher shop SYNC: Everything, Everywhere deck? Not really. You have better use of cards slots and if you want a counter current you might as well play Scarcity of Resources: it's cheaper and almost always hits.

So Surveillance Sweep does not appear to be the best card for the "tier one" decks people bring to big championship. Does it makes it a useless card that can't be extremely powerful in a deck a bit outside the box? Hell no!

First thing first: Surveillance Sweep just reverse how traces work. Often enough when a trace fire either you can pump it enough for the runner to be unable to counter it or you let it standard. Which means that if your traces are not spicy enough the runner can just tax you or pay the minimum cost. Not with the Sweep in play. A trace to end the run ends up being hard or taxing to the extend of your money reserve. Moreover, if the runner is ready to invest resources in a trace, you have the information about it being worthwhile or not and can use your money accordingly. It also makes multiple traces that much more powerful: all the resources used on the first trace won't be available for the second. And it is your decision to save your money when the runner invest and put it to use somewhere else.

So Surveillance Sweep is at its best used with tracing ices (and tracing effects happening during a run). What else is it good to combine with?

If you look at identities, NBN: Making News and New Angeles Sol: Your News have obvious combinations with this current. The Effect from NBN: Making News especially can read "Until the corp gets a successful trace you paid money on, all traces are 2 points stronger. " That is super strong. With Sol you can make sure to always have it on... but the price might be high.

Two recent new cards however could really push this card into average playability: Net Quarantine and Macrophage. With the Quarantine scored (unfortunately you can't Media Blitz it with the Sweep...) traces become even better: The runner spends money first, gives you money and you can then use that money back to pay for the trace. With two into play you can ensure any trace you want will fire as long as you start with one credit (a bit more if they have a lot of link though...). With Macrophage the Ice becomes "3 to rez 7 strengh virus hate. Last sub: the runner can spend a stupid amount of money or the corp will end the run". Bonus points if you are NBN: Making News or you have a Rutherford Grid installed or some Improved Tracers scored. All of a sudden, if you have a decent economy, that becomes a really good defensive ice, helping you protecting your servers... and ensuring the sweep survive longer!

Of course, all of that nice dream of a yellow glacier can fall into pieces if your opponent play some Power Tap which, in my humble opinion, just annihilate traces. Link is also a problem but this is a good enough mitigation: the runner is less taxed but he still has to pay to go through your ices or bad things may happen.

I'm in no way a top player nor can advise this card and the archetype that goes with it to any power player. But if you just want to have some fun, try it out some day, you may discover wonders!

(Quorum era)
InquisiteurArax 25
Nice review. Back in another age (shortly after Data&Destiny) I used Surveillance Sweep + Improved Tracers to make slow yellow never-advance glaciers. They _kinda_ worked (I'm a Tier 2 player at heart!), because they were so unexpected. I think today this is harder, because of so many high link runners, but with Macrophage and Net Quarantine, hey... maybe it's worth a try to dust them off. Just, you know, to confuse people on JNet :D — Krams 6 Feb 2017