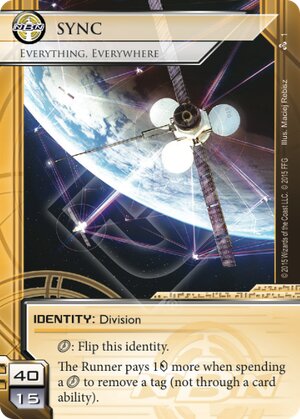 The Runner pays 1credit more when spending a click to remove a tag (not through a card ability).

You may pay 2credit fewer when spending a click to trash a resource (not through a card ability).

Illustrated by Maciej Rebisz
Decklists with this card

Sync is a fun little nugget. The look on the runners face when you remind them that it costs 3 to shake a tag can be satisfying. Flipping over after an Account Siphon to trash a few things at 0 credits can be pretty neat. It won't make you a bacon sandwich though, so I have to shave a few points for that.

(Data and Destiny era)
Grumblecorn 66
Can you give us some pros/cons? your review is kind of vague — Handsome Jack 3 Apr 2016
2

Some IDs in Netrunner are very general-purpose: you can build pretty much any sort of HB deck you like out of Haas-Bioroid: Engineering the Future, for example (which is why it was eventually rotated out – there was rarely a reason to run anything else). Some are much more specific. SYNC: Everything, Everywhere is an ID at the "more specific" end of the scale; the only general-purpose benefit you get from it is the 40-card deck size, so if you're planning to use this as your ID, you're going to want to do something with the increased cost to shake tags.

There are basically two ways in which increasing the cost to shake a tag benefits you as the Corp:

These are both reasonable bases to build a deck around! However, one thing you have to bear in mind is another, very similar, ID: NBN: Reality Plus. "R+", as it's affectionately known, also gets a benefit from the first tag it lands each turn – and it gets a swing of 2 (or 2 cards, if you prefer), which is usually going to be worth more than taxing the Runner 1. R+ also gets the coveted 40/15 deckbuilding statistics, just like SYNC does.

So in order to find a niche for SYNC, doing something that R+ can't do better, you'll need to be going heavily onto one of two plans: landing a huge number of tags simultaneously, or exhausting the runner of credits, Spark-style (so that −1 runner credit is worth more than +2 Corp credits). These are both things that SYNC does better than R+, although you're giving up a lot to get them. Most notably, SYNC doesn't give you any economy directly, so you can often end up starved for credits; unlike R+'s economic drip, SYNC needs to get all its credits the hard way. This means that a lot of thought needs to be put into trying to make your deck's economy work.

There are thus some cards that you're going to see almost-universally in SYNC decks. The most obvious is Hard-Hitting News; it lands four tags all at once, and is better when the Runner is low on credits, so if you have a deck that doesn't want HHN, it won't want SYNC either. HHN is particularly good in SYNC, because the Runner will need 12 to clear all the tags without tech cards, as opposed to the usual 8. SYNC is thus very good at punishing early aggression (even better than NBN: Controlling the Message is), and can typically score an agenda or two early.

Because of this, another very good card for SYNC is AR-Enhanced Security. ARES is one of the best agendas in the game, generally improving the decks it goes into even if it has absolutely no synergy with them. SYNC decks have quite a lot of synergy with ARES, though. For one thing, the ARES tags cost more to shake, causing a direct synergy between the two cards, but there are a couple of more subtle advantages: SYNC can often score early through the threat of Hard-Hitting News, meaning that you can often get your ARES score in while it really matters; and unlike R+, if you score multiple ARES, your ID is giving you benefit from all of them (unlike R+, which triggers only once per turn). Most importantly, though, ARES can patch up SYNC's economic problems by enabling you to run an asset economy; asset economies work best when the assets are hard to trash, and the combination of ARES's tags and SYNC's economic denial creates an excellent environment for economic assets to thrive (e.g. the classic PAD Campaign, whilst not a universal inclusion, is an entirely reasonable card to run in SYNC).

There's also the matter of deck style to think about. Generally speaking, both R+ and SYNC want to run a lot of cheap taxing ICE and a lot of random tagging: cards like Ping, IP Block, Turnpike, and the like. SYNC would prefer to land all its tags at the same time, though (if you're not doing that, R+ is normally better). This pushes SYNC decks towards the glacier end of the scale: they like building big servers in order to get lots of tags off at the same time. So you'll often see big-server cards like Surveyor in SYNC decks, even though they'd be rare in R+. "Heavily ICEd R&D, heavily ICEd scoring server, and lots of unICEd remotes as well" is a very unusual build shape, but it's almost the default when it comes to playing SYNC. Daily Business Show (or even Sensie Actors Union if you somehow found a format where it isn't banned) is thus a fairly important card for SYNC: it helps prevent the deck running out of ICE, by reducing the need to protect HQ.

Bellona is close to an auto-include in SYNC, unless you're using an agenda mix that can't tolerate 5/3s. It's a good card even in the abstract and it also works well with SYNC's economic denial plan – it wins you a lot of games that you would otherwise lose because the Runner doesn't have 5 to steal it with, or because they do have 5 in their credit pool but need to hold it back to avoid a lethal Hard-Hitting News hit.

One final card that's seriously worth considering is Snare!. The Jinteki decks that play this normally hardly care about the tag. In SYNC, though, the tag is half the point; your Snare! may be expensive to trigger, but when you do, it'll be an enormous tempo hit to the runner (who ends up losing three cards, three credits, and a click). If you can build a big server which tags the Runner repeatedly as they run it, and get them to hit an ambush at the end of it, you've probably won the game; direct tagging ambushes like AMAZE Amusements are theoretically better for this, but Snare! has the advantage of firing on random HQ and R&D accesses, so the additional centrals protection means it's worth the influence cost. Quite a lot of my games playing SYNC have been won by a Snare! hit, either from the tag, or from a flatline, or just from value damage (sometimes it snipes the runner's only copy of an icebreaker, or an Apocalypse, or the like, causing their deck to no longer function). Snare! is therefore a card worth keeping in mind, especially when running against SYNC. (It works pretty well in R+, too.)

In summary: you won't see SYNC very often nowadays, because most of what it does, NBN: Reality Plus can do better. It does still have some niches, though: economic denial, and anything that lands a large number of tags all at once (such as Hard-Hitting News and large servers full of Pings). It finds it harder to build a viable economy than some Corp decks do; expect to be spending a lot of slots on economy. However, it can protect an asset economy with the help of AR-Enhanced Security, so it isn't all gloom on the economic side. So overall, not a terrible ID, but fairly niche, and you aren't going to see much deck variety out of SYNC decks in practice. And if you're playing against it, watch out for Snare!!