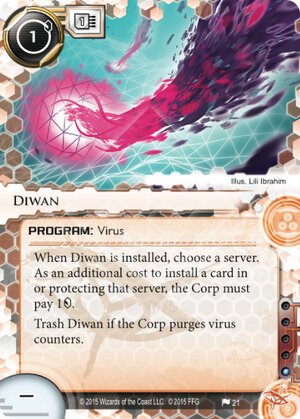 When you install this program, choose a server. As an additional cost to install a card in the root of or protecting that server, the Corp must pay 1credit.

When the Corp purges virus counters, trash this program.

Illustrated by Lili Ibrahim
Decklists with this card

This card will only ever mildly inconvenience the Corp, even when used against a scoring server, even when the runner has managed to Account Siphon or #Vamp the corp. A Noise: Hacker Extraordinaire deck that just wants to mill out the corp can consider playing this card for its cheap install cost, but since it takes up 1 it will probably get sold to Aesop's Pawnshop before long anyway.

Diwan is also vulnerable to getting purged with Cyberdex Virus Suite or Cyberdex Trial although it is extremely unlikely to provoke a purge by itself.

Now considering targets, either the scoring server already had plenty of Ice or the corp can just start building up a new scoring server. This means the corp will only need to pay to install upgrades or agendas in that server. Now if you manage to put 3 Diwans on a single server then the corp will probably purge. This means you've spent 3 and 3 and tied up 3 to force the corp to spend 3 (and mill 3 cards if you're Noise). You will also have had all your other virus counters purged as well. Likely you will have spent additional and to tutor or recur the Diwans in the first place since it's quite unlikely to just draw all 3 of them in the first place.

(Business First era)
Zakalwe 479
It seems like this would work best in a knifed/forked/spooned Eater deck that really wanted to hammer HQ or R&D, but wasn't running very many other viruses. — Eldil 22 Mar 2016
Based on actual gameplay I would have to revise my opinion of this card upwards a bit. I now think it's about as good as Lamprey. Slap a parasite down and then one of these on the same server and you will sting the corp for 1-2 credits (Aesops ASAP however). — Zakalwe 10 May 2016